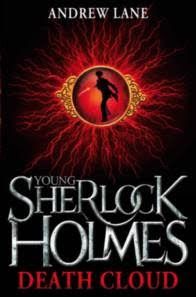 
The year is 1868, and Sherlock Holmes is fourteen. His life is that of a perfectly ordinary army officer's son: boarding school, good manners, a classical education - the backbone of the British Empire. But all that is about to change. With his father suddenly posted to India and his mother mysteriously "unwell", Sherlock is sent to stay with his eccentric uncle and aunt in their vast house in Hampshire. So begins the summer that leads Sherlock to uncover his first murder, a kidnap, corruption with a brilliantly sinister villain of exquisitely malign intent...


The Death Cloud is the first in a series of novels in which the iconic detective is reimagined as a brilliant, troubled and engaging teenager - creating unputdownable detective adventures that remain true to the spirit of the original books.


It's been a while since I've read any of the Sherlock Holmes stories and I'm embarrassed to say I've read very few. However, Holmes is no less than a legend and a book based on his early life hasn't been done before. It's a brilliant idea though and I was keen to see what Death Cloud was like.


Well, it's a thrilling read. If you like Victoriana (I do) then this is a treat. It's stuffed full of period details and very authentic. In the early chapters of this book I felt so sorry for Sherlock; a bit of a loner, distant parents and a brother who's much older. The school he attends sounds awful and poor Sherlock is looking forward to going home for the summer. When all this is whipped out from under him and his is deposited in Hampshire, Sherlock finds his inner resilience and the reader starts to see hints of the man he'll become. He meets an orphan called Matty who lives on a barge. Matty has witnessed an awful cloud which drifted into an open window causing the occupant to let out an awful scream and die. Sherlock and Matty team up to investigate the phenomenom and soon find themselves getting into trouble.

The plot itself is a thrilling ride with barely a lull between adventures. It was also darker than I thought it would be which was an unexpected extra. It's full of evil housekeepers that emerge from dark corners, mysterious notes, bodies and evil henchmen. I can't spoil the ending but the villian is truly fantastic. I want to say so much more about this villain but can't! Arghhh! You'll just have to read it to find out and then let me know. All I can say is that at times when I get to the denouement I'm left feeling that there could have been more meat. Not in the case of Death Cloud which has a truly satisfying conclusion.


In fact I only have one criticism of Death Cloud - I really wanted to see more of was Mrs Eglantine. Possibly she may turn up in future books but her character is gloriously hateful. Another great character is Amyus Crowe, Sherlock's tutor for the summer. Rather than being a stereotypical dull teacher, Crowe is full of interesting insights and information. He walks Sherlock around outside and shows him edible mushrooms and how to spot little things that other people miss. Again, Crowe is shown to be someone who influences Sherlock and helps form his character.


The part I was looking forward to most was looking out for all of those idiosyncracies which make Holmes so, well, Holmes. Sherlock's detached relationship with women is hinted at through his remote and ill mother who's barely mentioned. He meets a girl called Ginnie through the course of the story who befriends him. He's initially very awkward with Ginnie, which is to be expected at fourteen but the beginnings of the man he becomes is beautifully shown. We even see Sherlock having his first contact with opiates through laudanum which I wasn't expecting but it shows that this series has the potential to be quite surprising.


In the author's afterword it states that there are to be more books following Sherlock at school and then at university. I look forward to these but especially the ones at university as this suggest a more YA feel which I think would bridge the gap well between the fourteen-year-old that Andrew Lane has created and the thirty-three-year-old Sherlock that Arthur Conan Doyle introduced us to.

I was very excited about this project when I first heard about it (being a big fan of Young Bond too) so it's great it seems to have come up to scratch. Can't wait to read it!

What a brilliant idea, he is such a complex character so imagining him as a teenager is really interesting! I shall have to look out for this one!

Thanks Sarwat & Dot!
I hope you enjoy it, I thought it would be an exciting read but was enthralled watching Sherlock's character unfold.