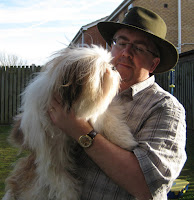 Hi Andy
Thanks so much for coming to hang out with us!
1. How / what made you decide to start writing?
I didn’t have a choice really; it’s always been something I was compelled to do. I wrote my first book when I was 10. It was about a stuffed soft-toy rabbit called Bunjy and I even sent it off to Puffin. It was rubbish though and they rejected it. Ha! Bet they regret that now, huh??

2. Tell us about Demon Strike, your offering from Chicken House?
Essentially, it’s a ghost story. The main character, Alannah Malarra, is a psychic ghost-hunter who tracks down ghosts to steal their treasure. She has incredible powers and can fire astral bolts and grenades from her fingertips and palms. Ghosts are terrified of her, but she bites off a bit more than she can chew when she stumbles into the middle of a war between Gargoyles and A.N.G.E.Ls.

3. What was your first reaction when you saw that utterly cool cover?
I thought, WOW!! And I adored the lenticular cover. Children absolutely love it: I was at a school event last week and one of the boys couldn’t take his eyes off the cover. He kept nudging his mates and pointing at the demon’s tongue as it flicked in and out. Chicken House do the most amazing covers.

4. Your two human characters, Alannah and Wortley are a very unique pair as problem solvers go, which is clearly a good thing. What came first, the story or the characters and dude, those names! Where did they spring from?
The characters came first, or at least Alannah did. She popped into my head and refused to go away. We even tried to change her into a boy, but that didn’t work. I wanted to create names that children would remember and I think Alannah Malarra has a nice ring to it. Wortley is named after a village in Leeds, my old home town, and I try to include the name of a Leeds village in every story I write. Coming soon, Farnley Sour!!!

5. Then of course we need to talk about Flhi. Tell us about ex-Trooper Flhi and A.N.G.E.L. What was your inspiration here and how much fun did you have messing around with words and meanings?
I love Flhi Swift. She’s everything I think a hero should be – cool under pressure, brave, tough, smart and feisty. Again, she popped into my head in the same way Alannah did and I liked her from the first time we met. Flhi Swift is a lot like me – or at least the ‘me’ I’d really like to be J – which probably sounds really strange, because I’m a guy. (Crikey, it sounds like the book is full of female characters, but it isn’t. There’s Wortley, A.N.G.E.L Commander Rage, Mayor Cheer and Troopers Yell & Gloom. And the Gargoyles are all male too.)

Why A.N.G.E.Ls? Well, I just wanted to use something we all know or think about and spin it on its head, in a funny way. I mean, what’s funnier than imagining A.N.G.E.Ls with guns and gadgets? Of course, when you read the story you quickly realise that Flhi and her Troopers aren’t angels in the conventional sense at all; they’re part of the A.N.G.E.L Patrol Force (stands for Attack-ready Network of Global Evanescent Law-enforcers.) They’re a new kind of ‘good guy’ – heroes for the twenty-first century! Or is that a little too ambitious?

6. You keep up a lively dialogue between Alannah and Wortley. They are continuously worrying at one another. Did you find it difficult to keep up the pace with them?
Not at all. Now this is going to sound strange, but I don’t feel like I wrote it at all. The characters were always bickering away inside my head so I just scribbled down the things they said. They are really close friends – like brother and sister – and they know each other so well. I think the pace of their banter is a result of this.

7. The critters and monsters you throw at your three characters – researched or hunted by yourself?
I’d love to say I hunted them myself. I do visit quite a number of old houses and always hope to see a ghost but so far, no luck. Krot the Gnarl is something completely different. I wanted to create a new beast to fear and make it really evil and sinister. Hopefully I’ve done the job; I certainly wouldn’t like to meet a Gnarl, even if I was tooled up and ready to fight like Flhi. You should have met some of the creatures which my editor cut from the book. I might try to sneak them into book two.

8. Tell us about your journey to becoming a published author.
It’s been a real struggle over the years, but mostly against myself! Although I’d always dreamed of becoming an author, I’d never had the discipline to do much about it. I’d start at least one book each year, but always without planning it. Unsurprisingly, I’d run out of ideas and momentum after a few chapters and the story would die.

But with Demon Strike it was different. Once Alannah had arrived inside my head, I sat down and listened to her story. Mapping it out helped – it certainly made writing the story a lot easier - and soon I had a manuscript I was proud of.

I decided to approach agents, rather than publishers direct, and after sending out eleven letters, I received two offers of interest. I chose Lucy, my agent, because she rang my mobile phone and her enthusiasm for the story fizzed down the line. We polished the story together and then Lucy found Chicken House. They loved it too, and now it’s published. Yippee!!!

9. Do you have playlists for when you write?
Yes I do. It’s all the songs I loved when I was a teenager; mostly eighties stuff like Brian Adams’ ‘Run to you’, ‘Boys of Summer’ by Don Henley, and (don’t laugh) tracks from Rocky 4. They’re cheesy as heck, but I love ‘em and they really drive me on.

10. Demon Strike is only the first of the A.N.G.E.L. Patrol books in the series you have planned. As I’m nosy I’d love to know: will each book be standalone or have you incorporated an overall story arc that will span the other books? In other words, what do you have up your sleeve?
There’s definitely a continuing story arc and I’m currently working on book 2, which picks up the story around two weeks after book one ends. I’m also working through the planning stage for an entirely new series, which might be for slightly younger children, or not. As you can tell, it’s in the early stages of development.


11. Almost at the final question but this one I have to ask: pirates or ninjas?
Ninjas! No contest. (But I would say that; I used to be a trainee Ninja!!)

12. Any advice for aspiring writers?
There’s the usual advice, which every writer trots out, about reading as much as you can. It really does help, but only if you can analyse what you’ve read and then work out why it’s good and why the publisher liked it. Then compare it to your own writing and see what you can improve.

Also, plan your work. Invest time in creating and getting to know your characters. Don’t put pen to paper (or finger to keyboard) until you know the journey your characters are about to embark upon. Then, rewrite everything until it’s as good as you can make it. Oh, and get as much feedback as you can and listen to it; it’s the only way you’ll learn and improve.
Who wrote this? Liz at 8:54 am

A great interview. Is Demonstrike primarily 9-12/MG fiction, or perhaps a little older?

awesome. The cover is very cute.