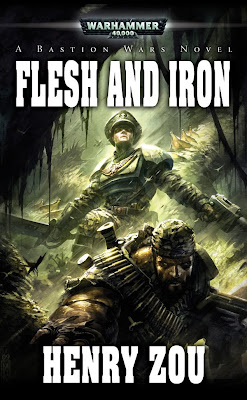 From the planet of Solo-Baston, there come reports of an uprising. It seems indigenous forces are rebelling against Imperial rule, and a mysterious figure known as ‘Dos Pares’ is at the centre of the conflict. Into this chaos, the 31st Riverine Imperial Guard are dispatched to neutralise a vital battery of siege guns, and find themselves surrounded by hostile local forces. But what the regiment first dismiss as simple tribal warfare soons turns out to be something much more sinister and dangerous.

Ah, the imperial guard. Cornerstone of the Imperium. While the Space Marines might be the icons and embodiment of the 41st millennium, the men and women of the Imperial Guard are the glue that holds it together. Their lot is stand against the myriad of enemies that threaten mankind armed with only bravery and the strength of the man next to him, each as mortal and vulnerable as you or me. So when it comes to their stories, they’re an entirely different animal to those of the Space Marines; these men experience fear and terror, despair and weakness. And with that comes an obligation for the author to provide a story that strikes a balance between these factors, the ferocity of combat in the 41st millennium and the heroism that lifts and binds it all, and keeps the fans coming back for more.

With this in mind, Henry Zou has given us Colonel Baeder and his 88th Battalion of the 31st Riverine, a regiment hailing from a homeworld characterised by swamps and bayous, brought to Solo-Baston to capitalise on their experience with amphibious assaults. They’re selected to undertake an essential but dangerous mission into the heart of enemy held territory, and it’s from there that Henry really turns up the heat.

The oppressive environment of Solo-Baston is well described, and the difficulties of waging a war in that kind of setting carefully considered. There aren’t any glorious charges or massive pitched battles, only a series of brutal clashes and ambushes, the frustration of the guardsmen palpable as they inch towards their target and the fantastically claustrophobic, close quarters battle that awaits them.

What I appreciated most though was that the characterisation of Colonel Baeder and his leading men weren’t sacrificed in the desire to deliver on the action. They grew on me, and when they were betrayed,it struck a real chord, and frankly left me fuming on their behalf- and that's quite something to achieve, no matter what you're writing.

If I had any reservations, it would be that the after effects of the betrayal and Baeder's ultimate fate felt slightly rushed; however, the depth of the betrayal is such that you can understand the vulnerability it would expose, particularly after what they'd been through.

It didn't detract from my enjoyment of Flesh & Iron though- it's a fast, clever and brutally entertaining delivery for anyone who's a fan of military sci fi, whether of the 40K variety or not.
Who wrote this? Mark at 7:06 pm