Salt and Silver by Anna Katherine 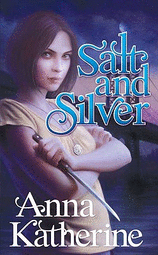 Allie can't seem to get it together. Ever since her mum ran away to Rio with Rio - her tennis instructor - stealing Allie's trust fund and her comfortable way of life, Allie has been floundering. She works in Sally's Diner, and lives above it. And one night in the basement, she and her friends chant a ridiculous spell - for money, for luck, for love...and open a Doorway to Hell. Ryan thinks he's got it all figured out. When the Door opened he appeared out of nowhere, a Stetson-wearing demon hunter. He's assigned to the Door, and hangs out at the diner, and when the Door disappears he is certain that Allie had something to do with it. But something strange is happening in Brooklyn; something bigger than Allie, and Ryan, and the Door in the diner basement. And when a meeting of demon hunters gives birth to a dangerous idea, Allie and Ryan are left to wonder if the fragile feelings growing between them can survive a trip to Hell...or if they themselves will survive at all.

I've seen Salt & Silver kicking around my Amazon recommends for a little while now and eventually succumbed to buying it. (Please note, the current jacket on Amazon looks weirdly different to the cover I've received, I'm not sure why.) And I read it in a few big gulps.

Alie's voice carries the novel the entire way and it's an excellent voice that grows on you the more you read it. She tough, but sweet and on occasion a bit ditzy, but fiercely loyal and protective of her friends and of the diner.

Six years ago, Allie, her two best friends Amanda (spoilt, rich and a bit of a diva) and Stan (once upon a time a skateboarder gay kid, now a gay club kid) in a drunken fit of stupidity thought to try a summoning spell in the basement of Sally's Diner. Amanda instigated the whole mess, remembering how the girls in the cult movie "The Craft" did it all those years ago.

Somewhere along the line, someone listened and before you could say: "sorceror's apprentice" a door to hell appeared in the basement of the diner and scary man with big weapons in a leather coat came striding in, stopping them in their rubbish ritual and saving their backsides.


Since then, Ryan has been living in the basement, making sure that none of the critters from Hell used the door. He's even gone as far as training Allie to hold her own against various minions. There is a simmering attraction between Allie and Ryan that for all its sexual tension is actually very sweet.


The authors have spent a lot of time doing research and coming up with believable sigils, spells and different types of hells as Allie and Ryan and a group of other Hunters go on a quest to figure out why Allie's door in the basement had disappeared. The dialogue between Allie and Ryan is fast and snappy. The world can tell that Allie fancies the pants of old Ryan but he plays by the rules and keeps Allie at arm's length.

The fact that there are different types of hunters was touched on just enough to give us a glimpse of the fact that more about them may arise in the upcoming novels. I hope so, at least, as it would be a crying shame to have created a coolfactor like these guys and not play it for all its worth. What made it also interesting is that the hunters are in different factions and it was through Allie that they combined forces to enter hell on a quest.

Parts of their quest through the various hells and travelling was dull - but then, this the big thing about a travelling by foot / animal, story - it does become monotonous and feel dull after a while. Because really, you're travelling. Nothing exciting about that. I felt that some of the set-ups were a bit too much Dungeons and Dragons where the DM feels "now I throw these giant spiders at you, what do you do?" "now this wondrous dragon with swirling eyes flies at you, what do you do?".

What the authors (Anna and Katherine) manage to convey though is their research and geeky love for theology, myths and legends. So, in that respect, I can't wrong these two ladies, at all.

Allie's voice is very strong, amusing and sarcastic. It's as if there is no guard between her thoughts and what appears on the page - like in Meg Rosoff's How I live now - it's a bit stream of consciousness and although it's not a bad thing, it becomes a bit over the top in some instances and you want to shake her to just I don't know, quieten her down a bit, to get her to act less me-me-me and realise the true predicament they are in. Having said that, I liked Allie as a character. I soon "got" her voice and was happy to go with it, but I suspect some readers may not enjoy it that much.

I'll make no bones about it: Salt and Silver is puply Saturday afternoon fiction, to be digested with a bowl of popcorn and maybe some Doritos. It's fast paced and fun and sweet and it makes you wish the best for the characters in the book. Allie's character goes through the bigger story arc but nothing is rammed down your throat - and this I liked - because her development is gradual and real, so that when the big-bang comes and you realise that she is in fact a bit more than just a normal, you don't doubt her capabilities at all.

Find the authors website here .
Who wrote this? Liz at 8:37 am

I liked this one too. Allie's voice sounded a little young, but not quite YA and it seemed to fit her age well. I also liked the romance although I did cringe a bit at how BIG Allie's crush was. I liked the parts in hell more than you did I think .. very trippy!