Dead In The Family by Charlaine Harris 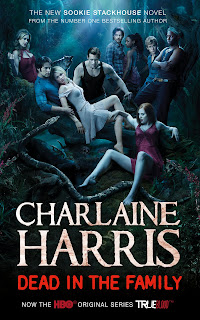 Synopsis
If you think your family relationships are complicated, think again: you haven't seen anything like the ones in Bon Temps, Louisiana. Sookie Stackhouse is dealing with a whole host of family problems, ranging from her own kin (a non-human fairy and a telepathic second cousin) demanding a place in her life, to her lover Eric's vampire sire, an ancient being, who arrives with Eric's 'brother' in tow at a most inopportune moment. And Sookie's tracking down a distant relation of her ailing neighbour (and ex), Vampire Bill Compton.

In addition to the multitude of family issues complicating her life, the werewolf pack of Shreveport has asked Sookie for a special favour, and since Sookie is an obliging young woman, she agrees. But this favour for the wolves has dire results for Sookie, who is still recovering from the trauma of her abduction during the Fairy War.

I love Charlaine Harris - there, I've said it. I'm only missing the Aurora Teagarden stories before I have the full set. To say I was excited about reading Dead In The Family is a massive understatement. After wrenching it from Liz's hands I started reading on the train on the way home. The book opens finding Sookie dealing with the awful aftermath of the fae war. I'm glad that the reader gets to make this journey with Sookie rather than joining her months afterwards. It becomes apparent from the first few chapters that things are changing in Bon Temps. Amelia returns home leaving Sookie alone in her house. Well, almost alone as Eric is firmly by her side helping her recover. Four weeks later and Sookie is sunbathing again and has regained some of her sparkle.

Sookie, as generous as ever, makes the slightly unwise decision to let the Shreveport pack use her land. True to her character she is happy to help but finds that sometimes this can end up causing more trouble than it's worth. This opens a fascinating storyline that touches on the politics that Sookie has got herself tied up in over the years.

I felt that Dead in the Family is almost a return to a more traditional Sookie Stackhouse novel. With the closure of the gate between Bon Temps and the fae world and Amelia's absence the plot is able to concentrate on the actions of shifters, weres and vampires with greater effect. Yes, there are still some fae present but it reads like a natural progression. After all, fans wouldn't expect Claude to just disappear and with Sookie's heritage this part of the storyline flows. I loved the reintroduction of the importance of Vampire Bill's database and the way that, despite her misgivings, Sookie just can't stop getting involved in his (after)life.

I only have one slight misgiving which is the new creation of Eric's maker Ocella. I'm not going to say who this new vampire is as I don't want to spoil it. The character is brilliantly deadly and twisted but I'm not sure about the historical basis for him. It works for Elvis/Buba as this character is harmless but I'm not sure how Ocella's "child" will be received. I felt a little uncomfortable but then maybe that's just me. I'm interested to see how other readers feel. Sookie shares the readers discomfort I think, so from that point of view I think that Charlaine Harris is showing that not everyone should be brought back from the brink of death.

However, there's far more to celebrate than worry about in this latest offering. Apart from everything I've already mentioned I was happy to see the FBI back again and some interesting Bill back-story and extra trouble for Sookie in the form of a body on her land. I enjoyed Dead In The Family enormously, it had everything I could ask for from Sookie and a few tied-up loose ends that I wasn't expecting.
One more thing - as lovely as the UK cover is I adore the illustrations on the US covers so I'm adding it here in all its glory! 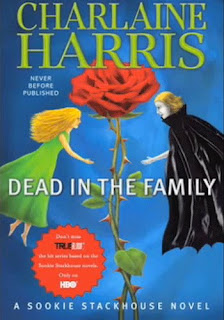 Email ThisBlogThis!Share to TwitterShare to FacebookShare to Pinterest
Labels: charlaine harris, Dead in the Family, gollancz

I adore Sookie stackhouse and I can't wait to read this. I have to say though, I hate both covers. I don't like TV tie-in covers and the US covers put me off reading the books for ages :) Just me, I'm guessing!

First, that is an awesome cover (UK), I much prefer it to the US. LOVED your review. While this was not my favorite book in the series (think 4) I still enjoyed it.

Thank you! Much as I love the tv series I'm not a massive fan of tie-in covers either. I must admit that my favourite in the series so far is All Together Dead (number 7 I think) but this book seemed to progress a great deal in terms of plot.