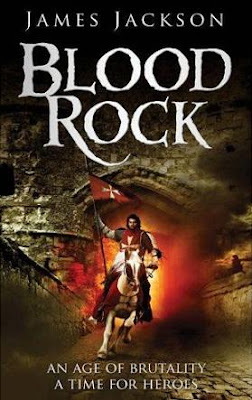 1565, Malta - and the greatest siege the world has ever known.

The legendary Hospitaller Knights of St John stand alone on the island of Malta against the tide of Islam. The Ottoman Emperor, Suleiman the Magnificent, has sent the greatest armada that ever set sail to wipe them off the face of the earth. Time is running out . There is a traitor among them. Malta's doom is sealed.

But one man will never yield. Englishman Christian Hardy will stop at nothing to save the island. With a band of close companions- the Moor, a genius inventor of demonic weapons, Luqa, a young orphan set on becoming Christian's protégé, Hubert, his longstanding friend and spiritual counsellor and Maria, a beautiful noblewoman who rejects the sanctuary of Sicily to be with him. With the help of these steadfast comrades, Christian must now summon all his courage to face an unbeatable enemy, and change the course of history . . .
When we were in Malta last year, I spied a copy of Blood Rock on a rack in the supermarket and congratulated myself on spotting a promising looking holiday read; unfortunately the price tag of 18 euros put me off and I returned it to the dusty rack it probably still calls home.

A couple of weeks ago I glimpsed a copy of it on a bookshelf and promptly bought it- there was a feel of ‘unfinished business’ about it. Armed with my memories of Valetta, I cracked it open and met the main character, one Christian Hardy, a roguish figure with a chequered past and a ready sword.

Soon enough, Hardy is drawn into the Great Siege by notions of honour, duty and the unspoken promise of a beautiful woman. Battle is soon joined and Hardy appears to be in his element as he pushes himself to the edge against the invading Turks. But a traitor lurks amongst the Order, dispensing poison and betrayal from the shadows; the ranks of those Hardy can trust thin as the Siege builds to its climax.

However, for all of the action and the intrigue, I felt quite ambivalent towards Hardy and the fates of his comrades. Considering his role as the hero, his character isn’t really explored, leaving him a bit.. flat. The supporting cast of characters suffer from the same dereliction, which left me struggling to find a reason to root for them. Added to this, while the deprivations and the acts of desperate heroism of the Great Siege are well documented, the action is robbed of its chance to redeem the story as much of its potency is lost by being largely glossed over and Hardy’s seeming indifference to the terrible danger and suffering around him.

Unfortunately, all things considered I have to say that if asked to recommend something for this period or setting, I’d point you in the direction of Tom Willocks’ The Religion.
Who wrote this? Mark at 10:33 pm

Best thing about your reviews is the honesty. It's really appreciated.

Still it's great they're publishing straight historical fiction!
I might just read it as a change from all the supernatural stuff.