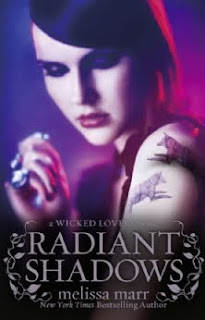 The events of Fragile Eternity have left the faery world off-balance, its key players fighting to maintain control over their world - and its secrets... Devlin lives in a world where everything is beautiful, ordered... and cruel. As a prominent member of the High Court and a half-brother to Sorcha, the High Queen, he's one of the most powerful faeries of the old guard. Ani lives in a world where every line is blurred. Half human, half faery, half in the decadence of the Dark Court and half out of it, her life of dive bars, tattoos and street fights couldn't be farther from the clean lines of the High Court.

But you can't choose where your heart will take you, and when Devlin and Ani meet, two extremes of the faery world collide - with passion, violence and heat; for better - and for worse ...
I don't know about you but whenever a longed for sequel in a series is published I experience a range of feelings; nervous that I won't love it and increasingly sad as I read that it will be over soon. Or will I feel disappointed? Like I said, lots of feelings.
I had a little shimmy through Fragile Eternity to remind myself of the events that lead up to this one. Marr has a brilliant talent to show enough of characters in previous books that they don't feel like strangers in the next. As a result I felt I had an idea who Devlin was. He and Ani take the limelight in this book and I warmed to them both immediately.
All I knew about Ani from previous books was that she's the irrepressible daughter of Gabriel. Gabriel is head of the hunt and Ani has inherited more from him than her human mother. In Radiant Shadows we find that Ani is changing and that her blood means that she's potentially deadly. I was used to Dark Court fae feeding themselves upon the emotions of others but Ani is an anomaly, she can feed from both emotions and touch - a dangerous combination. As a result more than a few fae want her dead and the likes of Irial are experimenting on her to discover how she can help the Dark Court. Unfortunately for Ani she had attracted the attention of Sorcha - ruler of the High Court and her twisted sister Bananach, the terrifying bird-like faery who is becoming more deadly with each instalment.

Another main character in Radiant Shadows is Rae, a ghostly girl who wanders into faery and asks Devlin to protect her. He hides her away, his secret, telling no-one that she exists. She can take over his body and also walk within people's dreams. She isn't simply Devlin's friend though. Unbeknownst to him she befriends Ani in her dreams, willing the two to get together. Ani is a fabulous character; gutsy, reckless, loyal and frustrated by her limited role in life. She feels that she is changing, becoming less mortal and more hound with every passing day but her father won't take her seriously and scares away any potential partners. As soon as she meets Devlin the action picks up its pace and (as predicted by Rae) events begin to unroll. Their complicated relationship develops in a surprising way; Devlin is used to rules and following order whilst Ani can barely control her impulses.

Meanwhile Sorcha is a mess in this book. She took on a touch of mortality when she turned Seth into a faery which was evident at the end of Fragile Eternity. The end result is that Sorcha has lost interest in her land and disorder begins to intrude. I was intrigued by Bananach's motivation for taking Seth to Faery but in Radiant Shadows her motives become clearer and the road to war seems inevitable. I can only bow down to the intricate web of Marr's plot as decisions made in earlier books come out to play. There's one more book to go in the series and although Radiant Shadows has a satisfying conclusion there are still many unanswered questions.

In case anyone is wondering, Aislinn barely appears in this book. I must admit that I'm pleased as she did iritate me a little in the last book. I love Seth, so this has probably clouded my judgement a little but this argument is one for another day! In terms of female protagonists Ani is right up there alongside Leslie who I adored - oh, and Donia.

I loved Radiant Shadows and was sad to have finished. When the last book comes out I wonder if Marr would consider doing a book that delves deeper into the world and gives a little more background on characters like Rae or Niall. I'm envisaging a glorious coffee table type book with amazing drawings. Excuse me while I dream about that for a while.
Who wrote this? Essjay at 8:00 am