The Monsters of Templeton by Lauren Groff 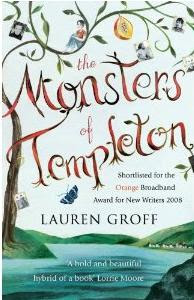 Willie Cooper arrives on the doorstep of her ancestral home in Templeton, New York in the wake of a disastrous affair with her much older, married archaeology professor. That same day, the discovery of a prehistoric monster in the lake brings a media frenzy to the quiet, picture-perfect town her ancestors founded. Smarting from a broken heart, Willie then learns that the story her mother had always told her about her father has all been a lie. He wasn't the one - night stand Vi had led her to imagine, but someone else entirely. As Willie puts her archaeological skills to work digging for the truth about her lineage, a chorus of voices from the town's past rise up around her to tell their sides of the story. Dark secrets come to light, past and present blur, old mysteries are finally put to rest, and the surprising truth about more than one monster is revealed.

I fell in love with this cover, then read the write-up on the back and I had to read it. And I am so incredibly pleased that I did. Sometimes books come along and they make you feel richer for having read them. The Monsters of Templeton is a book like that, for me.

Lauren Groff, the author, was shortlisted for the Orange Award for New Writers in 2008 and so she’s not someone whose name I recognised outright. I do sometimes think it’s good going in not knowing much about the book, the writing, the author. I closed my eyes and plunged in.

Groff’s writing is yum. Chapter One opens with: “The day I returned to Templeton steeped in disgrace, the fifty-foot corpse of a monster surfaced in Lake Glimmerglass.”

Wow. Amazing first line. And it only gets better. “It was one of those strange purple dawns that color July there, when the bowl made by the hills fills with a thick fog and even the songbirds sing timorously, unsure of day or night.”

It’s hard for me to explain what makes this book work for me. I suppose it’s a combination of the luxurious writing, the really funny instances in the novel when Willie is determined to show her mum that she has trouble with her mom (an ex hippy) dating a preacher, the almost dream-like quality of Willie’s thoughts about the trouble she finds herself in (trying to run down your married lover’s wife with a plane is not a good thing), and then the challenge her mum sets her: try and figure out who your dad really is.

As Willie uses all her skills as researcher and scholar, she uncovers a plethora of backstory from her family’s past and the inhabitants of Templeton. Here we segue into chapters that vary dramatically in voice and tone, as the author uses letters and diary entries to tell the story of various people from Willie's rather large and extended family and other players in Templeton’s history.

My mind boggled as I read these – just how did Ms. Groff keep it all straight and level in her head as she wrote it? These chapters could so easily have changed the pace of the novel, made it a dull read and perhaps distance the reader, but instead we have a rich tapestry that luxuriously drapes over you and draws you snugly into the narrative.

Look, I’m probably still too in love with Monsters of Templeton, a month after reading it, but you guys should know me by now. I’ll be honest about things. If you want something very different and wonderful to read, check this out of the library or invest some cash in buying a copy. Vividly quirky and richly evocative and utterly real, Monsters of Templeton stands as one of my favourite reads of 2010. Eventhough it was published back in 2008!

Also, the ending is really good. Really good. I was smiling through my tears. I just had to add that.
Who wrote this? Liz at 8:06 am

I really enjoyed this book too. I read it back in 2008 and I can still remember it all, so you will be pleased to know that it does stay with you :-)

I really like the sound of this and the cover is so lovely!