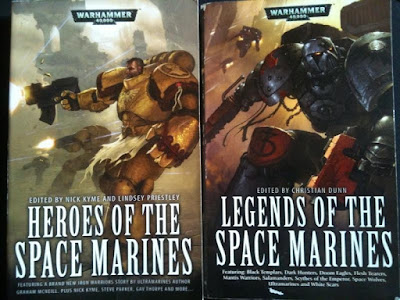 I decided to read these two anthologies back-to-back, for no real reason other than I thought it would make a neat two-for-the-price-of-one feature; the stories in the anthologies are all stand alone and make for bite sized forays into the battle-drenched world of 40K, although Nick Kyme’s Salamanders feature in both books, tying in with his Tome of Fire trilogy; his story “Fires of War” serves as a prequel to Salamander and his Tome of Fire trilogy.

I have to admit that I was expecting the stories to revolve around singular Space Marine heroes- there are characters in 40K lore whose names stand out from the rest and I was expecting (a.k.a hoping) that the anthology would be exploring their rise to legendary status; this was re-kindled when I saw “Legends” was on its way, but it was not to be (but then The Horus Heresy is already covering a lot of this ground one way or the other).

The ten stories that share the 408 pages of Heroes are a good mix of stories, opening with Graham McNeill’s “The Skull Harvest” which follows the continuing story revolving around Honsou, the enigmatic foe that features in his Ultramarines series. The stories race along nicely, averaging no more than 50 odd pages apiece (apart from Nick Kyme, who checks in at a greedy 79 pages, although it’s no hardship to remain in the Salamanders’ company for that bit longer).

My favourite offering of Heroes though has to be Steve Parker’s "Headhunted", which follows a Deathwatch kill-team as they board an Ork hulk and hunt down the Boss. The Deathwatch are a really cool concept, an elite, secretive group recruited from any of the loyalist Space Marines chapters and tasked with hunting down the most dangerous foes of mankind. It’s atmospheric, the characters are interesting, and it conveys a real sense of deadly urgency and danger- and does it all in 53 pages.

Legends, blessed with some fabulous cover art, weighs in at heftier 539 pages which are again shared amongst 10 stories and a wide variety of legions. It keeps to the same formula, providing a good mix of stories from different perspectives, with Paul Kearney’s The Last Detail being the one that stands out for me. Set in the aftermath of a titanic battle between the loyalist Dark Hunters and the chaos tainted Punishers, it follows the story of a native boy and his father as they uncover a survivor amongst the carnage, a setup that serves as a canvas for Paul to show the gulf between the Marines and the people who they are ultimately there to protect.

On the flip side, CS Goto's "The Trial of the Mantis Warriors" could have benefited from a tighter edit. Revolving around the thoughts of the Chaper Master of the Mantis Warriors as he is interrogated for alledged heresy, it drops into flashbacks of the events leading to the heresy which can work well. However, there's a deluge of new characters, places and Chapters in short order, and it's hard going figuring who fits where and who's doing what. I got it in the end, but only after going back and forth several times to work it out.

Overall, I really enjoyed these- the short stories are great for quick reads when commuting and the like, and each sports a good variety of stories that keeps them interesting, preventing them from becoming ten stories of different Space Marines shooting different aliens.