Blood and Feathers by Lou Morgan 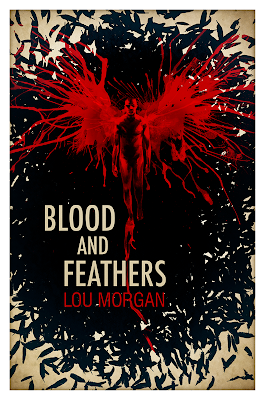 ''What's the first thing you think of when I say 'angel'?'' asked Mallory.

Alice isn't having the best of days: she got rained on, missed her bus, was late for work. When two angels arrive, claiming her life so far is a lie, it turns epic, grand-scale worse. The war between the angels and the Fallen is escalating; an age-old balance is tipping, and innocent civilians are getting caught in the cross-fire. the angels must act to restore the balance - or risk the Fallen taking control. Forever.

Hunted by the Fallen and guided by Mallory - a disgraced angel with a drinking problem - alice will learn the truth about her own history... and why the angels want to send her to hell. What do the Fallen want from her? How does Mallory know so much about her past? What is it the angels are hiding and can she trust either side? Caught between the power plays of the angels and Lucifer himself, it isn't just hell's demons that Alice will have to defeat...

Uch, I enjoyed Blood and Feathers a lot. It's a debut novel and it reads fast and confident, twisty and turney and I'm so looking forward to seeing what Ms. Morgan comes up with in Book 2.

Alice is an average girl - or she thinks she is.  At the beginning of the novel we meet her at a very bad time.  Enter two odd blokes who stand by and watch when the ceiling in her house opens and hands rip her father into who knows where...and well, you know Alice isn't in Kansas any more.  See what I did there?

Talking from a mythology and angel lore point of view here, Ms. Morgan has really done her research.  I know this because we've touched on it in the past via twitter and I've read some interviews she's done and we've fan-girled about Milton and other esoterica when we happened across one another at an event.  It's easy - for me - to see her influences and to understand the bigger picture she's painting here with Alice's story.  And even though I knew, at the back of my head, what was going on, I totally fell for Alice, for Mallory and the story as a whole.  Here are characters I'd like to spend time getting to know better.

The themes are big - good vs evil but it isn't as easy as that.  It would make for a dull read.  Lines are blurred here and being good doesn't always mean it's a good thing.  Key to the story though is Alice finding out about herself.  Her character development is handled deftly and I felt, after the opening sequence, that I am in safe hands here and really shouldn't worry about this journey I'm undertaking with Alice.

We are introduced to a cast of characters and the concepts of choirs within the angel realm. These aren't the cupid type angels either - they aren't actually nice guys, really.  They are warriors and get the job done, come what may.  But then, they have allegiances, and there are things we don't know yet or understand going on in the background.  It's all rather good fun to figure it out as the story moves along at a very fast pace.

I'm loathe to say more as it will get spoilerific which I refuse to do but genuinely, if you're in the mood for rather grown up urban fantasy, where the author clearly loves and knows what she's doing, then you can't go wrong buying yourself a copy of Blood & Feathers.

Oh, just a note if you think this is yet another "angel" paranormal romance book - it honestly isn't.  This isn't what you'd expect, at all, and it sits so neatly on the shelf next to authors like Mike Carey / Mike Shevdon / Katie Griffin / Ben Aaronovich and Suzanne McLeod.  Blood and Feathers is Supernatural/The Prophecy/Fallen/Priest all rolled into one with added crack and kickassedness and genuine humour.

Find Lou Morgan's website here.  Blood and Feathers is out now with the second book out next year.

Great review. I definitely like the sound of this one. Deep and dark angels backed up with research? Yes please! Just popping over to Goodreads to remind myself I want this ...