In 2008 I met Mo O’Hara, the funniest person I know – even funnier than me, if you can imagine that! But, I was soon to discover that Mo wasn’t just funny. She was American too. And a bit macabre. She told me this story about her and her brother bringing their goldfish back to life using a battery. I was all “yeah, right” but no, she swore it was true. On the back of this story, she subsequently wrote a book to shut me up. That book is MY BIG FAT ZOMBIE GOLDFISH and today, my friends, on Halloween, I’m supremely proud to be hosting the cover reveal of this fantastic book: 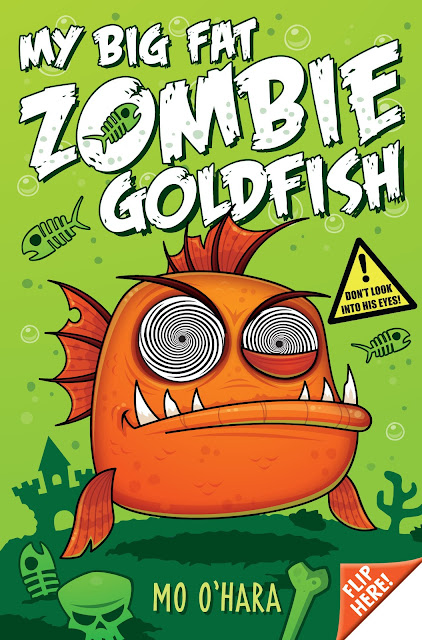 When Tom’s big brother dunks Frankie the goldfish into radioactive gunge, Tom zaps the fish with a battery to bring him back to life! But there’s something weird about the new Frankie – he’s now a Big Fat Zombie Goldfish with hypnotic powers . . . and he’s out for revenge.

I’ve read MY BIG FAT ZOMBIE GOLDFISH – it is charming, super funny and completely off the wall. It would suit younger readers and adventurous older readers who like wicked humour and mad science shenanigans and annoying older/younger siblings.

And because I have magical powers of my own (our little secret) we have TWO signed samplers to give away – the sampler is the first five chapters of this great new story and just so you know: there are TWO stories contained within MY BIG FAT ZOMBIE GOLDFISH. Pop a comment on the blog for a chance to win a signed copy or, if you are inclined to attempt the twitter odds, tell @Mo_OHara and @LizUK you’re keen to win a copy of the sampler and use #zombiegoldfish so we can find you. Both the blog comment entry and the twitter competition is UK only, I’m afraid. We will run the competition for all of Halloween in the UK, so get commenting and tweeting!
Who wrote this? Liz at 8:00 am

Fantastic cover! Can't wait to read it, sounds like just the sort of zany stuff I love.

Can not wait to read this! Well done Mo - the cover looks great.

Can't wait to be terrified. Posting on twitter too.

p.s: This is the 18th time I am trying to post and some supernatural force keeps rejecting my entry.

Am sooooo excited to read this. It may have to be used for my KS2 story club week later in the year!