No Easy Day by Mark Owen 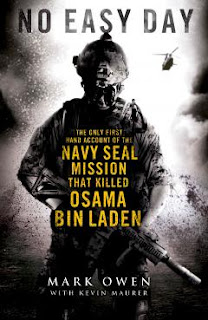 For the first time anywhere, a first-person account of the planning and execution of the Bin Laden raid from inside the US Navy SEAL team who carried out the extraordinary mission to kill the terrorist mastermind.
From the streets of Iraq to the successful rescue of Captain Richard Phillips from pirates in the Indian Ocean; from the mountaintops of Afghanistan to the third floor of Osama bin Laden's compound in Pakistan, operator Mark Owen of the US Naval Special Warfare Development Group - commonly known as SEAL Team Six - has been a part of some of the most memorable special operations in history, as well as countless missions that never made headlines.
..
I like reading first hand accounts of battles and wars. It feeds my inner armchair warrior and, besides the side-effect of being great background and research for characters who may one day populate my own writing, it's also humbling and a reminder that for some people out there, war is more than a genre and patriotism about more than waving a flag.
I'd also like to think that I've read enough of them of them to be able to catch the whiff of self aggrandisement that threatens to creep in when someone's writing about themselves. No Easy Day is pleasantly whiffless. By the time he was brought in for the operation that lies at the heart of the book, Mark Owen had served on active, operational duty for over 10 years. 10 years of actual shit-hitting-the-fan deployments. That's plenty of time for reality to filter out any ego stoking bullshit, and it comes through in the writing.
The first thing is that it's very readable. This isn't about blocks of dates and a dull treatises about this-general-did-that and so-and-so-lobbied-for-this; it's a reader friendly account that is meant to set the record straight about what it means to be a SEAL and the truth behind what happened on the raid that saw Osama reaping his personal whirlwind. It's about the men, not the man, and the vehicle that Owen uses to put that it across is by sharing some of his own experiences. It's through these that we're shown the level of dedication, the level of professionalism and the particular mindset that is required to go out there and do what needs to be done, time and time again. By building this foundation into the book before he sets out the background and preparation for the raid on Osama's compound you can understand how their professional detachment from the scale of what they were attempting and exactly why he decided to write the book.
It's well written, very engaging, and while it doesn't breach any official secrets, there's enough in there to make you reconsider a few familiar headlines from the war in Afghanistan (and think about more than the next unlock next time you fire up Call of Duty). Thought provoking without melodrama, No Easy Day is a welcome addition to my non fiction shelves and I would recommend it without hesitation whether you have any particular interest in the military or not.