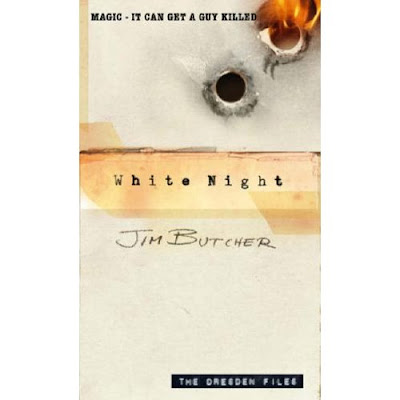 In brief: (courtesy of Amazon.co.uk)
A series of apparent suicides rings alarm bells with the police. And before he knows it Harry Dresden, professional wizard, is hired to investigate. At the first crime scene he finds an unmistakable magical taint - and a message specially designed for him, referencing the killing of witches. Harry is desperate to hunt down his tormentor and halt the killings, but instead finds evidence implicating his half-brother, Thomas. To Harry, this just doesn't add up, so he must add clearing his brother's name to his expanding list. Something that didn't make the list is subtlety, and Harry's search attracts the attention of the White Court of vampires ...Soon, whichever way he turns, he faces a power struggle that will render him outnumbered, outclassed and dangerously susceptible to temptation. And if he screws up, his friends will die.
The not so brief:
This has to be one of the best Dresden books which Jim Butcher's written. I have to admit that I read it too quickly, purely because I wanted to see what happened. I did not skip anything, too much happens in it, to do that to it, but it just rolled at a cracking pace and I 150% enjoyed reading it. I cannot wait for the next one to come out.
You can tell that a lot of work went into this one - it is very well written, funny, rocks with action and there are amazing one-liners - enough to make Joss Whedon watch his crown as the King of One Liners.
Harry gets into a lot of trouble - nothing new there - and he has a strong cast to back him up. Jim's writing is strong, confident and the internal dialogue which he has Harry muse about is relevant, hilarious, interesting. In all, a really good book, worthy a re-read.
Who wrote this? Liz at 10:09 pm No comments: