Isn't it nice discovering an unread book on your bookshelf...one you thought you had read but once you've picked it up to leaf through it...you notice that you have not in fact had the pleasure. And you go and make yourself some coffee, haul out the rich tea biccies and formally introduce yourself to this new adventure.

And adventure it is!

Viking: Odinn's Child is the first book in a trilogy (the other two are already out, in fact, I already have book two waiting for me) and it follows the adventures of Thorgils Leiffson.

Our story begins in the year 1001 and the toddler, Thorgils Leiffson, son of Leif the Lucky and Thorgunna, arrives on the shores of Brattahlid in Greenland to be brought up in the fostercare of a young woman - Gudrid. Thorgils is a rootless character of quicksilver intelligence and adaptability. He has inherited his mother's ability of second sight and his destiny lies beyond the imagination of those around him. Virtually orphaned, he is raised by various mentors, who teach him the ancient ways and warn him of the invasion of the 'White Christ' into the land of the 'Old Gods'. Thorgils is guided by a restless quest for adventure and the wanderlust of his favoured god, Odinn. His fortunes take him into many dangerous situations as well as to the brink of death by execution, in battle, disease and shipwreck...Packed with wonderfully reimagined Viking sagas and adventures, and fascinating and unique characters, Viking - Odinn's Child gives historical novel writing a new dimension. - This from FantasticFicton.com

What I thoroughly enjoyed and am still enjoying as I have not finished the book - yet - is how beautifully it is written. The author, Tim Severin clearly loves his subject matter - being a bit of a historian, traveller and adventurer himself - and whilst it is packed full of interesting information that fills your head with the sounds, smells and t he stark reality of living in an age as violent and as exciting as this, he manages to make it not become tiresome. He is the master of showing and telling, all at once, but with such great skill that you only realise after the fact that you have just learned how they spent Christmas - Jol - in the Orkneys and what kind of ruler their king was, etc. Cunningly done and with great pace.

I can't wait to read it all - in fact, I have been to visit Tim Severin's website and I am delighted to learn that he is a true gentleman adventurer. He has several other books out, non-fiction, in which he travels the world, examining the stories and facts behind classical stories such as Jason and the Golden Fleece, Ulysses, Sinbad, etc. And that he has produced films and documentaries for the Beeb and National Geographic. Very impressive! 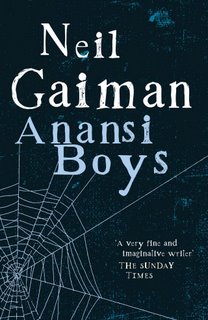 Och. The sheer jealousy this man's writing evokes in me!

Hubby bought the book for me as a present and it was such a treat to sit down and read it. One of those books - yet again - that made the train journeys just go so much faster!

Once again, Mr. Gaiman, decides to populate the world with gods, their offspring and all their hilarious and over the top wonderful adventures.

God is dead. Meet the kids.

When Fat Charlie's dad named something, it stuck. Like calling Fat Charlie "Fat Charlie." Even now, twenty years later, Charlie Nancy can't shake that name, one of the many embarrassing "gifts" his father bestowed -- before he dropped dead on a karaoke stage and ruined Fat Charlie's life.

Mr. Nancy left Fat Charlie things. Things like the tall, good-looking stranger who appears on Charlie's doorstep, who appears to be the brother he never knew. A brother as different from Charlie as night is from day, a brother who's going to show Charlie how to lighten up and have a little fun ... just like Dear Old Dad. And all of a sudden, life starts getting very interesting for Fat Charlie.

Because, you see, Charlie's dad wasn't just any dad. He was Anansi, a trickster god, the spider-god. Anansi is the spirit of rebellion, able to overturn the social order, create wealth out of thin air, and baffle the devil. Some said he could cheat even Death himself.

Returning to the territory he so brilliantly explored in his masterful New York Times bestseller, American Gods, the incomparable Neil Gaiman offers up a work of dazzling ingenuity, a kaleidoscopic journey deep into myth that is at once startling, terrifying, exhilarating, and fiercely funny -- a true wonder of a novel that confirms Stephen King's glowing assessment of the author as "a treasure-house of story, and we are lucky to have him."

I remember reading Neverwhere just before moving to the UK and somehow this slightly askance universe really made sense to me of what London represented. I became a big fan of Mr. Gaiman after this although, ashamedly, I will say that I have not read any of the Sandman graphic novels.

Anansi Boys is brilliantly written. His style of writing is so tongue in cheek and keenly observed that it can be written about any of our families'. Siblings you don't really want to have, but they stick nonetheless, embarrassing moments your parents pushed you into and you believed them because they would't lie to you, would they?

The main character, Fat Charlie had all my sympathy in this book - his life was invaded by a brother he didn't know he had called Spider, who, for all intents and purposes had inherited their dad's powers. Spider pretends to be him, blackmails his boss, charms his fiance and this is just the start of it all!

Such a well written funny book - and yes, I am being repetative here as I don't know what else to say other than "go and buy it, borrow it, but read it!".
Who wrote this? Liz at 5:44 pm No comments: