Writing My Way to Sanity - Guest Blog by Karen Mahoney

Karen erm..Who, you may ask!? Well, Karen is a young Urban Fantasy writer who I managed to convince that it might be a good idea to give us a "behind the scenes" tour of well, a bit about her. She's not yet published, but she has managed to land a fantastic agent so more good news and general squeeing will be happening - watch this space.

Here she is, in her own words: 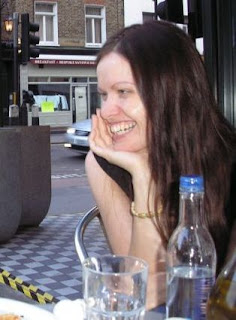 When Liz invited me to write a guest blog over here I was excited, despite wondering, “Why me? I haven’t even sold a book yet – let alone published one!” But then I thought: Well, I just took a pretty big step on this writing journey, and maybe people would be interested to know how I got here. My agent (yeah, I still get chills saying those two words *g*) is Miriam Kriss of the Irene Goodman Literary Agency in New York. So how did a London-based girl like me hook up with a major player like her?

Let’s back-up to October 2007. I wasn’t in a good place in my life. At all. My 3-year relationship had come to an end, the day job wasn’t going so well and I’d moved house 3 times in 6 months. I was tired and ill and I hadn’t written in a couple of months. And then two of my online friends and I decided to do our own mini-version of the NaNo writing challenge, where we’d aim for writing 30,000 words in a month: 1,000 words a day, I thought, would surely be manageable.

It gave me focus and a goal – something to aim for and to feel positive about. I picked up the notes I’d made back in June for a Young Adult urban fantasy called THE IRON WITCH, inspired by an essay by Midori Snyder in the Endicott Studio’s Journal of Mythic Arts: ‘The Armless Maiden and The Hero’s Journey.’

And I just got sucked into the story and carried away by my own characters, something that had never truly happened to me before. As I wrote, one of my cats slept beside me every day, recovering from having a back leg amputated after an accident – we honestly didn’t know if he would make it through. Each day I laid down more and more words, and each day my cat looked brighter and his strange post-op behaviour became less disturbing. During that first month, I know it sounds stupid but I honestly believe we were healing together.

I ended up writing far more – and far more quickly – than I ever imagined I could, and THE IRON WITCH was complete in early December. I let it rest before revising and getting critiques and revising again. And then in January I began querying agents in the US – I knew that YA urban fantasy had more of a market over there and I was determined to find an audience for my work, and for this book in particular. I didn’t know if I was good enough to get an agent yet, but something told me I might be onto something with this project so I persevered through the rejections and close calls.

There were a lot of rejections, but there were also a lot of requests for my full manuscript. As my hopes grew, I revised again – and then again – and I waited and hoped some more. Then I began writing another book, something new to take my mind off the continual rollercoaster.
I’d first queried Miriam back in January – she was one of the very first agents I wanted thanks to her reputation as an advocate for urban fantasy. The fact that she represents some of the best authors in the genre (Lilith Saintcrow, Vicki Pettersson, and Rachel Vincent to name just few) certainly didn’t hurt. By March I still hadn’t heard anything, but another agent sent a very kind rejection with the magic words: “I think you should query Miriam Kriss. You can use my name as a referral.” Here was my opportunity to ‘status query’ whether or not my original email had been received, and just hours after I wrote to Miriam she replied requesting the full manuscript of THE IRON WITCH.

Three more months later – where there were yet more close calls with some wonderful agents – Miriam offered representation. I screamed the house down when I read the email requesting a phone conversation. I couldn’t believe it – honestly couldn’t believe that this thing I had wanted to do since I was 12 years old was coming just a little bit closer. I have so much to look forward to in terms of improving the manuscript before submissions to publishers, while getting on with my next projects. I am dedicated to becoming a better writer, supporting other writers, talking about urban fantasy and one day seeing my words in print.

Oh, and my cat – the one who is currently running around the garden on three legs – is doing absolutely fine.

Contest: Anyone who comments over here on My Favourite Books telling me what their favourite urban fantasy book is (either adult or YA), will have their name entered into a ‘hat’ and a winner selected at random will receive a copy of Lilith Saintcrow’s latest offering – the just-released NIGHT SHIFT, first in the Jill Kismet series. I’m reading it right now and it ROCKS! You have until the end of the day Wednesday 9th July to comment. I’ll ship to any country.

To keep up to date with Karen and her writing, feel free to visit her over at her LJ site.
Who wrote this? Liz at 7:30 am

How super for you. Well done indeed.

"I screamed the house down when I read the email requesting a phone conversation. I couldn’t believe it – honestly couldn’t believe that this thing I had wanted to do since I was 12 years old was coming just a little bit closer."

A lump in my throat and a tear in my eye when I got to that bit, Karen. I know this yearning and I'm so happy for you! :)

My favourite urban fantasy is Jeaniene Frost's One Foot in the Grave.

I love this story! And I can't WAIT to read The Iron Witch - it sounds fabulous.

My favorite-ever urban fantasy is still Emma Bull's War for the Oaks, which is the first one I ever read, but there are many others I love, like Charles De Lint's Forests of the Heart, and Melissa Marr's Wicked Lovely and Ink Exchange.

And congratulations again - keeping my fingers crossed for The Iron Witch as it goes on the next stage of its publishing journey - and being selfish of course, cos then I get to read it ;)

I'm with Stephanieburgis in that my favorite urban fantasy is Emma Bull's War for the Oaks, and my favorite YA - Holly Black's books -Tithe, Valiant (Ravus is the hottest troll I've ever met *g*) and Ironside.

My favourite urban fantasy is also my favourite YA book: The Changeover, by Margaret Mahy.

Unless Pamela Dean's Tam Lin counts as urban fantasy? I tend to think of it as a college book!

Yep, like dear David, I'm all teary right now reading your post too. (Though that could be an unrelated matter...)

Anyway, for sentimentality's sake, my favourite is Kelley Armstrong's Bitten, as it was my introduction to the genre, and the author is still one of my most favouritest favourites.

Wow, I feel for the moving three times in six months thing--my husband and I got married, changed jobs, and moved five times in one year. Not the best way to start married life! (But we're happy, so I guess it worked out okay for us.)

I always hate picking favorites, so I'll go with most recent fun read: Nalini Singh's Slave to Sensation. I've been picking up her paranormals out of order, and they're so much fun!

I am so happy for you Karen! I can't wait to read your book ;)

My favorite Urban Fantasy read is War for the Oaks by Emma Bull.

What she doesn't mention is she's the sweetest and most humble lady you'll ever meet. ;)

Favourite UF would be....The Mercy series by Patricia Briggs. It's just...works for me. :)

I'm not surprised by your success, Karen. You had me there to help you. ;-)

And I've read a bit of Karen's stuff... and it's really, really good. And I'm sure that evaluation will only rise as I finish TIW.

Congrats again, Kaz. I'm really happy for you and I'm glad to be your friend.

What an awesome story-- I'm so excited for you, and only very slightly extremely jealous. TIW sounds great, too, can't wait to see it on bookshelves!

I loved Magic or Madness by Justine Larbalestier. Fun story!!

Since my TBR shelf is overflowing already, I'll bow out of the contest. Great job with your first guest post!! You rock, babe.

It's a difficult one - I think I'll have to mention three, and make it series in stead of books :)

I have lots of favourites, but three of the absolute best UF series I've read are the Women of the Otherworld series by Kelley Armstrong (especially Bitten and Stolen), the Mercy Thompson series by Patricia Briggs, and the Witch series by Kim Harrison. Runners up are the books by Lilith Saintcrow, Jim Butcher, Karen Chance, Jeanienne Frost, and Jennifer Rardin.

Hm, This thinking about good books is a dangerous pastime. Before I know it, I'm at the bookdepository....

Wow! So many great comments already - and some good urban fantasy suggestions too. Some I haven't read before so I'll be checking them out.

Thanks for all your kind words - and thanks to Liz for inviting me! :)

I don't want to enter a contest (esp as I'm lousy at picking just one of anything)). I just wanted to say congrats again. I'm looking fwd to news of your sale (and seeing it on a shelf some day so I can read it). It was a total pleasure meeting you in London. Next time, maybe we can grab tea too . . .

Oh, this story just makes me so happy. It's really inspiring, and the author totally deserves it. I can't wait until she makes her first sale--which will be soon, I know it. :)

It's so encouraging to hear how quickly things can happen. You are so lucky!

My favourite UF book... it's a tough decision, but I'll have to go with one from the series that started me reading the genre - Kim Harrison's Rachel Morgan books. My favourite is 'Every Witch Way But Dead' - it has a cool heroine, a hot vampire, and loads of interesting characters.

I love your story, Karen! And I'm happy your cat is better. Sick pets (or kids) break my heart.

And I could never pick just one. There are a few and they are current authors. And most of them are your agency sistahs. ;-)

congrats on the fantastic news.

Always knew you would get something out there and more.

I'm glad when I googled your name the other day low and behold there you are!

I look forward to reading your stuff.