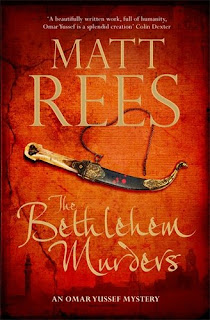 Omar Yussef has taught history to the children of Bethlehem for as long as anyone can remember. When a favourite former pupil, George Saba, is arrested over a murder, Omar is convinced that he has been framed. With George facing imminent execution, Omar sets out to prove his innocence.

As Omar falls foul of his headmaster and the local police chief, time begins to run out for this teacher-turned-detective. His classroom is bombed and members of his family are threatened. But with no one else willing to stand up for the truth, it is up to Omar to act, even as bloodshed and heartbreak surround him.

Along with quest adventures, really good detective and crime novels rank pretty high on my list of books to read for pure indulgence and enjoyment.

The Bethlehem Murders by Matt Rees falls into this category without a shadow of a doubt. A pure pleasure to read from start to finish with a main character, Omar Yusuf, being a likeable, tough and honest creation in a setting and situation where things are pretty awful.

Like in Barbara Nadel's books you are transported to somewhere so completely different to what you are used to, that you rely solely on the author's observations through the characters and therefore you respond in kind.

In the creation of Omar Yusuf, we have a very wise, sympathetic, honest and forthright person who gives a completely new outlook on the troubles of the West Bank in Palestine. It really brings the shock and horror of what it is like living in a desolate war-torn place home to those who have never had the opportunity to either visit or examine this awful conflict closer.

I hasten to add that although the book is highly charged and it gives a strong flavour of what things are like, it is not a political satire or political comment in any way. It shoots from the hip and tells it like it is. How gunmen are a daily fact of life, how Israeli fire from the other side of the valley is something to be endured. And how ordinary people like you and I soldier on because to give up is unthinkable.

And it is in the day to day lives of these people that the book shines. Through Omar's desperate search to save the life of his student, awful things are uncovered - George is being set up by an Isreali collaborator and other people are murdered to keep him from being released.

Omar's character is one created with deft skill. A wise, funny, honest and morally upright character he struggles to cope with the shock of people who are uncaring about the fate of not just his friend and ex-pupil but also has to face the total apathy from everyone involved in this case. Genuinely, no one seems to care. Yet Omar is that breed of man who sets his jaw, straightens his back and trudges on to find the truth, no matter what.

I really enjoyed the book and was sad to put it aside, having finished it in one long read. I will probably reread it again soon and I know that I will be buying some copies for friends to read as it is just so well crafted and held together by a character that is as enigmatic and truthful as I have ever come across.

Matt Rees scored ten out of ten in the character creation department and Omar Yusuf is a long slow study of an intelligent man caught up in happenings in a very brutal world where he struggles to retain his own identity and feels that he is the only one fighting for justice.

Matt Rees was born and raised in South Wales. He has covered the Middle East as a journalist for a decade, including six years as Time magazine's Jerusalem bureau chief. He is author of the non-fiction work Cain’s Field: Faith, Fratricide, and Fear in the Middle East. The Bethlehem Murders is his first novel. The second book in the Omar Yussef series, The Saladin Murders, is published by Atlantic Books in January 2008. Matt Rees’s website is www.mattbeynonrees.com.
Who wrote this? Liz at 6:58 pm

Good review, this book sounds really interesting. I shall put it on my wish list.

Great review! This book sounds like a good read.