Working for the Devil - Lilith Saintcrow 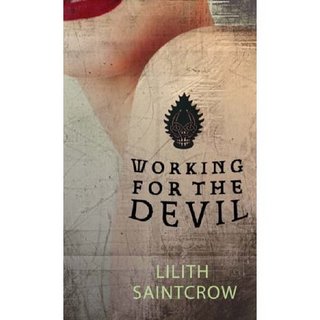 Dante Valentine's working relationship with the Devil began on a rainy Monday. Dante's a licensed Necromance, one of the best ever to survive training, and she's got an emerald embedded in her forehead to prove it. That's why the Devil sends his minion to hire Dante to kill Vardimal Santino, a fugitive demon. As Dante points out, Necromances don't kill people, they bring them back; or at least their ghosts. But turning down Lucifer isn't something you do if you want to stay alive, and besides, it turns out she's got a score to settle with Santino. Desperate to track down an enemy she can't find, Dante is bonded with a demon familiar she doesn't trust and a small band of psychics who seem almost as determined to help her as she is to refuse their help. The thing is, Dante doesn't need friends, she needs a miracle. Because the first time Dante Valentine met Santino, she almost died.

I found a copy of the book at Forbidden Planet, read the back once...then again. And bought it. How could I not!?

And let me say, I am not disappointed. And I am even happier to learn that there are more books on the way from Ms. Saintcrow.

She has created a funny warm hearted heroine who seems very tough, very capable and hilariously funny. Dante has a good background, loads of things hinted at which could be used in the next few books. She is convincing as a person, even if she is a Necromance, and not a section of "magic" which usually gets written about - and I am not talking Garth Nix and Abhorsen here either.

The story is set in the future. A lot has happened - magic is real, as is angels, demons, the Fallen, vampires, necromances, psions and other paranormal types. It works - you do not get overloaded with needless information, very few pieces of information get repeated (for example, you learn that Dante can handle herself in a tough situation, unlike the Merry Gentry books by LKH, where you constantly have to hear how small she is, how tiny her hands are, how pretty she is or how macho her men are) - Dante is Dante - she is capable and eventhough she has been thrown in the deep end with a familiar, from Lucifer himself, she draws herself up and does what she has been told/asked/cajoled into doing.

I would really recommend the book. If you are after a "fresh" voice, a strong female lead character and a hugely amusing cast of supporting characters, do give it a whirl. You will not be disappointed!
Who wrote this? Liz at 10:41 pm No comments: