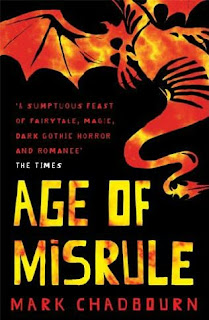 Mammoth book. Huge. Vast. Bigger than Dr Strange and Mr. Norrell.
It did worry me and I had to get a separate little book bag from Paperchase to carry it in as it would not fit into my handbag. I could use it to weight lift. And I did. I also accidentally dropped it on a rude man's foot when he decided to try and squish me into my seat by really opening his legs wide to accommodate his bits (like there was anything) - and I think I might have done some serious damage to his foot.
Mwaah aaah.
Right. Onto the actual book review of Age of Misrule by his majesty Mark Chadbourn. When I grow up, I want to write as well as he does. The amount of pure research that went into writing AoM is staggering - oh, I hasten to add that this is actually an omnibus of a series of books and these are as follows:
World's End
Darkest Hour
Always Forever
This from the Amazon website:
All over the country, the ancient gods of Celtic mythology are returning to the land from which they were banished millennia ago. Following in their footsteps are creatures of folklore: the Fabulous Beasts, shape-shifters and Night Walkers, and other, less wholesome beings. As they grow in power, so technology is swept away. It is myth and magic that now rule supreme in this new Dark Age: The Age of Misrule. The Eternal Conflict between the Light and Dark once again blackens the skies and blights the land. On one side stand the Tuatha de Danann, golden-skinned and beautiful; on the other are the Fomorii, monstrous devils hell-bent on destroying all human existence. But in times of trouble, come heroes. Five flawed humans, Brothers and Sisters of Dragons, are drawn together to search for the magical talismans which which to fight the powers of old. But time draws short and humanity looks set to be swept away ...
AoM has really restored my faith in modern reworkings of old myths and legends. How tired are you of the trite stories of Arthur and his band of men? I have come to steer clear of these books entirely as they have just become so incredibly dull - here, you are shown to look past the trite stories worked to satisfy a people keen for diversion. You learn to ignore the "Sunday School" version of many stories, of faeries, the Fay, The Misty Isle, of heroes and you find the grittier versions of them, the dirty mucky ones with real guts and very little glory.
I particularly liked the main character, eventhough there are five (well, six of you include Thomas the Rhymer who acts as the guide to the hapless 5) very diverse and annoying characters who do NOT want to do what needs to be done, the correct way, or the way you would assume it has to be done. Church, the main character, is a tortured soul, a lost soul, someone NO ONE would thought to be the hero of the future. He goes through his life in a shamble, having lost his true love to a senseless murder. He wants to die. He hates life, wonders about the meaning. Then, he sees something truly extraordinary, and meets Ruth who had shared the same experience, and together they start looking for answers and set the bowl rolling for the rest of the adventure. And no matter how you think things will turn out, you're wrong.
Mark just doesn't give you something on the platter. You work with the characters, feeling their joys and failures deeply. Which makes the ending even more poignant. It's not a Hollywood ending, its the ending the book needed.
I bow to the pen of a master - go visit his site, read his book and do enjoy his work as he is genuinely good at what he does.
Who wrote this? Liz at 10:14 pm No comments: