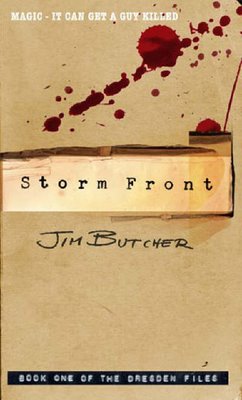 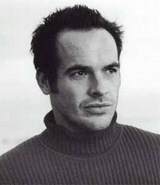 The Borgia Bride by Jeanne Kalogridis 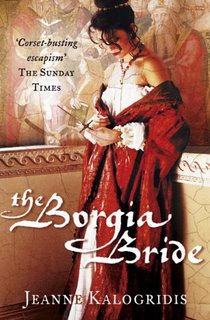 Continuing my historical novel romp, I started reading The Borgia Bride this week. It was one of my birthday presents which I had asked for on my "wishlist".

Ye gods, I am utterly loving it.

What I resent though is the fact that on the cover it is cited as "Corset Busting Excitement" by the Sunday Times. Why is it, when a man writes a historical novel it is called a historical novel (even if there is sex scenes every few pages, raping and pillaging), but when a woman writes one (there has been 2 sex scenes and I am on page 300-odd) it is called a bustier-buster? Anyway, I suppose it makes the books sell...either that or the chap/ette from the ST didn't actually read it and went on the blurb on the back!

Ahem. I am not finished with it yet - I reckon two or three more trainjourneys into town and back home should do it. So, in the meantime, I copied this across from http://www.lovereading.co.uk/book/200

Breakdown of the novel:

Italy 1492 Pope Alexander VI is elected. And so begins the Borgia reign of terror.
Alexander murders, bribes and betrays to establish his dynasty. No one is immune. Rome is a hotbed of accusation and conspiracy. Every day, the River Tiber is full of new bodies.

Sancha de Aragon, daughter of King Alfonso II of Naples, arrives in Rome newly wed to Alexander’s youngest son, Jofre. Their marriage protects Naples against the ambitions of the French King Louis and gains Spanish support for the Borgias. But Rome is very different to her beloved Naples.

The debauchery of the Borgia inner-circle is notorious: every lust is indulged and every indiscretion overlooked. Sancha is no innocent: she possesses an indomitable spirit which allows her to survive in the snake-pit, but her ancestors once rivalled the Borgias in cruelty and Sancha’s greatest fear is that blood will out.

Lucrezia Borgia’s vicious jealously stings Sancha at first, but gradually the two young women develop a cautious friendship. Lucrezia, adored by her father but used ruthlessly as a political tool, seems deceptively innocent and sympathetic, and their bond strengthens when Lucrezia is married to Sancha’s treasured brother, Alfonso.

But when Sancha falls in love with Cesare Borgia, her husband’s enigmatic older brother, she has no idea of how bizarre and internecine are the family's true ties. Alexander is rather more than an indulgent father; Lucrezia not the innocent she appears; and Cesare’s ambition burns wildly. The only safe relationship with the Borgias is none at all: as Sancha, her brother and Naples are soon to discover...

Thus far, I must say, we have another very strong female heroine. I look forward to seeing how the story developes! 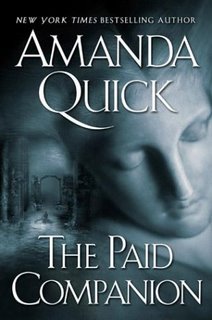 I found this beauty in the crime section in the Waterstones on Piccadilly and because I am a sucker for historical novels - okay, read, Liz is a sucker for any book that piques her interest - and loved the idea of an English nobleman deciding to procure his fiance through an agency that supplies paid companions to the elderly ladies...

Of course, things go "wrong" and he discovers that the young lady he has chosen is full of sass, is clever, and has strong morals and is also, accidently, quite lovely and is hailed as an original by the High Society circles they mingle in. The reason for his new "fiance" is a simple one - she is to be a distraction whilst he sorts out new business investments...and you can immediately tell that this is a lie, right!? Right! He is in fact after the murderer of his uncle and his companion / fiance turns out to be quite capable of helping him out.

A fantastically fun book - the characters are genuine and you really like Eleanora who is funny, witty and is not at all a wallflower.

I really enjoyed this book and have subsequently discovered that there are other novels written by this author.

Tell me what you see, Zoran Drvenkar 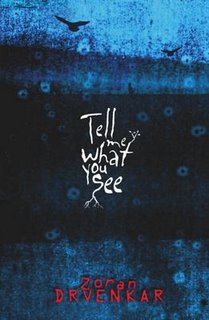 Berlin. The dead of night. Sixteen-year-old Alissa and her best friend Evelin make their secret Christmas pilgrimage to Alissa's father's grave. In the graveyard, Alissa falls through thick snow into an underground crypt. Searching for a way out, she discovers something else: out of the lid of a small coffin coils a strange black plant. Drawn closer, Alissa sees its roots embedded in a young child's heart. This chance encounter sets off a chain of nightmarish events that throw her life into turmoil. Haunted by angels, stalked by her ex-boyfriend, only with Evelin’s help can Alissa reclaim her sanity and discover the truth about her frightening new gift.

I bought this on Tuesday and finished it on Wednesday evening - it was that readable and that compelling.

I found Mr. Drvenkar's work utterly riveting and the prose, translated into English from German, a revelation in style. He conveyed so much atmosphere with few well chosen words. And he didn't skimp on being lyrical.

It is quite a grown up novel - it deals accurately and beautifully with friendships and relationships between friends and family. You really feel for the main character, Alissa the winter child and Evelin, the best friend. And by grown up, I don't mean x-rated (although he deals beautifully and maturely with lesbianism and an ex-boyfriend who is the loving one) but grown up in the sense that he tackles issues pertinent to his two girls in the book and makes them see it through and be the heroes in a very realistic way.

I don't really know how to describe the novel other than saying it is an intimate visit during a period in a young girl's life where she goes through something very strange - I enjoyed it thoroughly. I doubted her sanity, thinking that he was going to cop out and have it all be in her head ... that she was insane... but he had tricks up his sleeve and pulled out a whopping end.

I would recommend it highly - four out of five books!