The Name of the Wind, Patrick Rothfuss 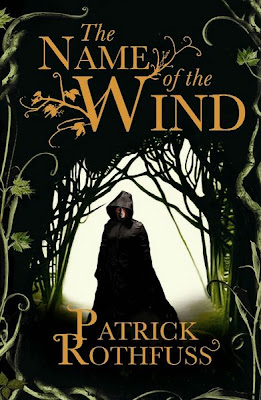 I have stolen princesses back from sleeping barrow kings. I burned down the town of Trebon. I have spent the night with Felurian and left with both my sanity and my life. I was expelled from the University at a younger age than most people are allowed in. I tread paths by moonlight that others fear to speak of during day. I have talked to Gods, loved women, and written songs that make the minstrels weep.

You may have heard of me.


The Name of the Wind follows the story of the enigmatic Kvothe, who we meet as a small town innkeeper. However, an unexpected visitor will be the catalyst that reveals him to be so much more than his appearance suggests; he becomes the reluctant narrator , revealing the birth of the legend that surrounds him, a legend that Patrick keeps tantalisingly out of reach in this, the first of the Kingkiller Chronicle trilogy.

Kvothe is a well considered, sympathetic character, an interesting hybrid of trouper, beggar, scholar, bard and arcanist who you can’t help but root for. He’s ably supported in his adventures by a cast of characters that are both interesting and varied, sharing the limelight without stealing it.

Patrick’s confident, polished writing flows across the page, belying the fact that this is a debut novel. His writing is tight, with not a word wasted, the story unfolding at a measured pace that satisfies and teases in equal measure; each paragraph a baited hook that pulls you deeper into the story and keeps you turning the pages at a brisk rate.

All in, Name of the Wind was an absolute pleasure to read and one I have no hesitation in recommending to anyone!
Summer Reads list score:

Email ThisBlogThis!Share to TwitterShare to FacebookShare to Pinterest
Labels: fantasy, gollancz, patrick rothfuss, The Name of the Wind

This book is fantastic. You should follow his blog - he's a very entertaining author.

(My screen name on a lot of sites now is 'daeonica' - which comes from this book.)

Definitely one of the best books I read in 2008. Can't wait to read The Wise Man's Fear.

Yeah...the only downside about devouring the book was the sudden realisation that I had to wait for my next fix :P

Hey, at least you don't have to wait so long as some of us - he's now finished book 2. (I read it over a year ago - far too much waiting time!)

This looks good and you reviewed it well. I guess you did recommend it to someone....
me.