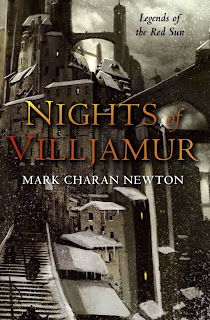 An ice age strikes a chain of islands, and thousands come to seek sanctuary at the gates of Villjamur: a city of ancient spires and bridges, a place where banshees wail the deceased, cultists use forgotten technology for their own gain and where, further out, the dead have been seen walking across the tundra.
When the Emperor commits suicide, his elder daughter, Rika, is brought home to lead the Jamur Empire, but the sinister Chancellor plans to get rid of her and claim the throne for himself.
Meanwhile a senior investigator in the city inquisition must solve the high-profile and savage murder of a city politician, whilst battling evils within his own life, and a handsome and serial womanizer manipulates his way into the imperial residence with a hidden agenda.
When reports are received that tens of thousands of citizens are dying in a bizarre genocide on the northern islands of the Empire, members of the elite Night Guard are sent to investigate. It seems that, in this land under a red sun, the long winter is bringing more than just snow . . .
---
Unfortunately I missed the chance to have a quick chat with Mark at the recent signing hosted by Forbidden Planet due to a work commitment. It’s a pity, as I would have liked the opportunity to tell him how much I enjoyed Nights of Villjamur in person.

In Nights, he’s created a world on the cusp of an ice age that is tightening its grip across the lands, freezing oceans and bringing waves of refugees to seek shelter outside of Villjamur’s locked gates. Behind these uncaring walls, the shocking murder of a councillor sets an inquisitor on a path that will send him into a world of shadow and intrigue far more deadly than any ice age. Meanwhile, in the distant north, an implacable and mysterious enemy has arisen, insatiable and ruthless, slaughtering it’s way across the land.

The characters are well thought out, particularly Jeryd, the inquisitorial investigator. He’s a interesting, underestimated character. Shaken out of a mild case of depression, he’s plunged into a quagmire of deceit and murder that begins slowly, like a snowball rolling down a long hill. As his story arc unfolds, and others fall into place alongside his, the pace subtly increases until you don’t notice the pages turning anymore.

Nights is an epic fantasy chock full of fresh, off the wall ideas, yet Mark manages to keep the heady cocktail of cultists, flying soldiers, zombies, diabolical politicians, albinos and genocide under tight control, nimbly weaving the various storylines together into a satisfying whole.
It’s ambitious, interesting and great opening for the Legends of the Red Sun series - bring on part 2!

Hey, this sounds kinda cool! Haven't come across it before. I love how it's set in another world that mirrors our world's possible future fate.

I read it and it is a superb read. In the meantime there are a lot of reviews available - most of them positive.

Anyway here is a link where you find links to 13 reviews.