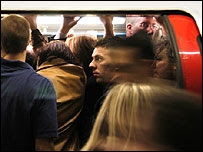 Legging it down to Forbidden Planet after work in time for a signing is always interesting. Last night I became quite intimate with a rather large man's smelly armpit in my face on the underground. I popped several mints and breathed out quite a bit, just to sort of "clean" the air. I think he thought I fancied him a bit, as my grimace may have been mistaken for a smile. I also tried not to think about zombie attacks, werewolf attacks or creature attacks of any sort. Thank you Hellboy, 28 Days Later and Mr. Romero and that other weird underground flick with the murderer in the underground...forget what it's called.

The upshot is I arrived at FP a little late. Mark Newton was doing his signing already. As I came walking around the corner everyone chorused: "There she is!" Am I a mini-celebrity or infamous? You decide...

I met Danie and John of FP, along with Graeme, legendary John Berlyne and two of the hardest working girls in the publishing industry, Chloe and Julie from TorUK, Mark's publishers. We chatted for a bit whilst Mark signed a STACK of books for a very avid fan.

Then it was my turn - I sidled up, introduced myself and immediately handed him something I had set up for Dave Brendon. Witness the coolness. 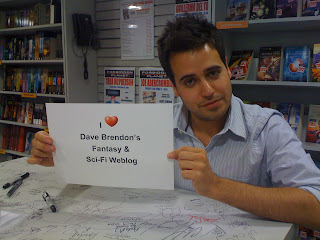 Then Mark signed our copy of Nights of Villjamur and I got his autograph in our tiny autograph book which is starting to aquire that really cool aspect of being well-thumbed and examined by various authors.

We chatted briefly (I spoke real words!) before Danie and John stepped in for a few photo opportunities and also to do a mini interview with Mark.

We retired to a nearby pub and I got a chance to chat to John Berlyne very briefly. I saw him several times at Eastercon earlier this year and I know he was promoting his book he wrote on Tim Powers. I had to confess and tell him about my epicfail at Eastercon when I asked one of the retailers in the Trader's Hall "Who is this Tim Powers?" ... and Tim Powers was standing RIGHT next to me. I kid you not. So once John found this out, he launched into a telling of who Tim is and what his books are about etc. I've resolved to buy in one or two, because I hate NOT knowing an author who has had such an influence on popular culture.

It was a lovely evening. Mark is incredibly funny and I think he and his editor, Julie, can quite easily pair up to do a comedy act. It was so nice to get a chance to chat to Mark the Author as I first got to know him in his role as the "face" of Solaris Books and the Black Library Guy (different to the Comic Book Guy in the Simpsons, Mark's much prettier) so we've only ever spoken "professionally".

Julie and I then legged it down to Charing Cross Station where we each went our way. A little bit high from lime and lemonade and from being around such witty and lovely people, I sat on the train, chatting to Karen, plotting our plan of action for the next few days as we are going to be together - a lot! Loads more signings and cool events coming up with YA authors.

Keep an eye out for a gushing blog post about meeting one of my personal heroes, Guilermo del Toro tomorrow...at Forbidden Planet. I love Forbidden Planet!
Who wrote this? Liz at 9:59 am

Bummed I couldn't make this, sounds like it was fun.

Still planning to make Saturday, even if this has been the week from hell.

I've said it before and i'll say it again "I want to live in London!" (you can picture the waaah face and the stamping foot right?)