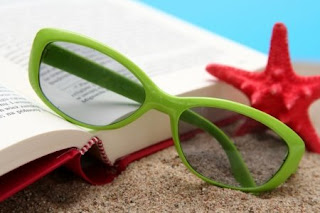 For a little while now, Mark and I have been thinking about doing our own version of the R&J Summer Reads. Now that Summer is here officially - in the northern hemisphere, at least - we've decided to go ahead and do exactly that.

The books on the Summer Reads list are books that I've received recently or bought because something about them drew my attention. There is no high brow criteria when it came to choosing these books. I may have liked the cover or the premise sounded interesting or it may have come to me by way of my writerly/bloggy friends who said that they liked it. The books on this list will also be the only books on the blog to receive starred reviews. Rare in itself.

The selected titles will grow - as more books come in / are bought. These reviews may not be as intense as our previous reviews, purely because we will be working towards a tight deadline. We will also be working very hard to get some of these to give away on the blog.

The way the books appear on the list is not in any specific order - they'll be read as Mark and I grab the next one in the pile. I may be getting some people to do guest reviews. So, fellow bloggers and friends of the blog, watch our for a nagging email from my side!

The intial list stands as follows:
Standalone Novels
Adult Reviews
Children / YA Reviews
Series Reviews:
Adult
Children / YA
It looks a lot but then Summer is long and we are doing our utmost to keep our weekends free as the past six months have been insane.
Who wrote this? Liz at 4:51 pm

What? not a single romance? *is sad*