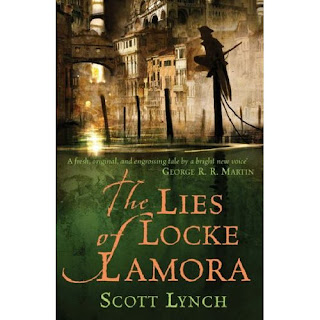 I've had Lies on my bookshelf for a while now and in a way, I regret not reading it sooner...but having said that, I'm pleased that I've taken my time to get to it.

It is luscious. Full bloodied. High adventure and thrilling.

One criticism though: dammit, write the other books!

The main character Locke Lamora is a well thought out, independent, and intriguing character. He leads the band of Gentleman Bastards. He also happens to be the Thorn of Camorr. Against his will. But this is not the end of his problems. It is only just beginning.

It is so very easy to see how this set of books can be turned into a very lucrative movie. Several, in fact. But I sincerely hope it doesn't, because no one but Johnny Depp will be able to play Locke and we definitely don't want things to hark back to Capt. Jack Sparrow. Locke is vastly different. And much more fun.

It smacks of daring-do and excitement, of crime-lords and vile deaths, poisons, bondsmages. In fact, I think Mr. Lynch sat at his desk with an entire set of characters drawn up from several RPG games and threw them into the mix to make the story work. And ye gods, it does. Hearteningly so.

If you've read either Robin Hobb, Fiona McIntosh, James R R Martin's books, the Bastard sequence of books will be for you. It's new, it's exciting, it's being written by a very talented chap who deserves all the medals and honours that can be heaped on him for rejuvenating a slightly flagging genre.