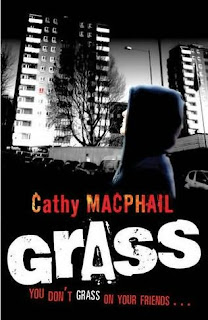 We are very lucky to have nabbed Matt Imrie, the Teen Librarian, to do us a review of this excellent novel by Catherine MacPhail.

It would have been hard to miss what was written on the wall. Painted in giant whitewashed letters.

SHARKEY IS A GRASS

I hadn’t a clue who Sharkey was, but I knew one thing. Sharkey was a dead man.
Leo and Sean are best mates, they live in a town dominated by gang culture and lead by three brutal gang leaders Armour, McCrae and Nelis.

The sense of menace is faint but palpable from the early pages of the novel. Leo (the main character) and his friend Sean have grown up surrounded by the violence and fear that the gangs provoke, but are relatively untouched by the lifestyle that the criminals lead. Leading a life that most young people experience – following their local football team, avoiding the school bully boys and living a fantasy life of pretend CSI their lives are untouched by crime until, during a game of urban trespass Leo stumbles over a cache of guns in an abandoned house. Too frightened to tell even his best mate, Leo’s life turns into one governed by fear. Fear of discovery, fear of what the weapons will do in his town and fear of being labelled a grass if he ever told anyone about what he had discovered.

Things take a turn for the worse, when, while sneaking home one night he witnesses the brutal murder of McCrae, and is seen by the gunman –gang leader and hardman Armour. Terrified, he says nothing, but Armour knows that him and knows that he has kept his mouth shut and begins to involve himself into Leo’s life.

Through the novel we witness Leo’s attitude towards Armour and the life he presents begin to waver. On the one side is his family – loving and fearful of the criminals that infest the town and Armour, on the surface a violent criminal but claiming to want peace, to end the gang wars and go legit. Leo’s life changes, the bullies, once the bane of his life now look at him in fear, his father lands a job after months of unemployment and Veronika the girl he has loved from afar is now interested in him.

Leo’s life, once a simple black and white world is changed into one of shades of grey. His father and Armour both want peace, but his dads route of peaceful protest and signature gathering seems less likely to succeed that Armours idea of buying off his remaining opposition, so Leo agrees to perform small favours for Armour becoming a go-between between him and Nelis.

The deeper that Leo gets involved in Armour’s world the more his relationships with friends and family changes. His earlier choices once made agonisingly become easier as he drifts further from his moral centre. The honour he perceives within the criminal world becomes more meaningful than his relationships with friends and family, and, rather than become a grass he instead becomes ‘Armour’s Boy’ and dedicates himself to helping Armour forge a lasting peace.

His hero-worship of Armour is destroyed, when he overhears his plans to locate Nelis’ stash of guns and turn him in to the police. Outraged Leo confronts Armour who threatens his life and family if he grassed on him.

Alone and afraid Leo must rely on his ingenuity to remove the threat to himself and family without Armour becoming aware of his plans.

Grass is a phenomenal crime thriller for Young Adults, Catherine MacPhail has crafted a gripping and realistic story that avoids the easy ‘crime is bad’ message and instead portrays how easy it is to get sucked into a criminal underworld and illustrates the importance of knowing who your friends are.
Who wrote this? Liz at 6:20 pm