Magic in the Blood by Devon Monk 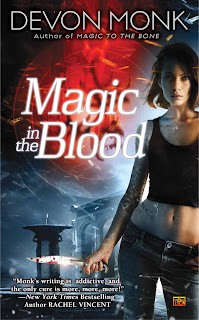 Working as a Hound—tracing illegal spells back to their casters—has taken its toll on Allison Beckstrom. But even though magic has given her migraines and stolen her recent memory, Allie isn’t about to quit. Then the police’s magic enforcement division asks her to consult on a missing person’s case. But what seems to be a straightforward job turns out to be anything but, as Allie finds herself drawn into the underworld of criminals, ghosts, and blood magic.

I LOVE this new series and I think “Magic in the Blood” is even better than “Magic in the Bone”, book 1. Allie Beckstrom is a great heroine, just trying to make a living in a world where, if you use magic, magic uses you back and it’s not very nice about it. For every spell used, Allie has to place a disbursement on herself, be it a head cold, a sore throat or a migraine. The more magic she uses, the stronger the backlash and sometimes it even takes memories. The concept, that magic is not free and unlimited, available to all with a drop of talent, creates a world where you have to be careful what you wish for.

“Magic in the Bone” ended with Allie losing most of her memories as she did everything in her power to save the man she loves. The same man she can no longer remember. Book two has a great opening scene where Allie meets her dead father while standing in the shower. Not something you usually expect and things get even more complicated from there. An ex-con, whom Allie thought was safely behind bars, got out and is now stalking her, not to mention a number of other parties, who are watching to see what she will do with her magical skills. Along comes a police detective, who has a reputation for killing Hounds, and asks Allie for help in finding a number of missing girls.

The story is told from Allie’s point of view and her voice (brilliant) pulls you in from the start, keeping you breathless with its twists and turns. What I really love about these books, is the fact that one moment Allie is getting drenched by rain and running for the bus (I mean, how normal is that?) and the next she has to fight of a bunch of pastel coloured people who want to suck out her magic.

And let’s not forget the one man who can make even Allie’s knees go weak, Zayvion Jones. He’s a complete mystery and neither Allie nor the reader really knows where’s he’s from, what his abilities are and what he’s looking for. But he’s sexy as hell and his magical abilities seem to be exactly what Allie needs. Now she just has to decide if she can trust him!

I love this series, the characters and the world Devon Monk has created and cannot wait for book 3 “Magic in the Shadows” which will be out in November.

Email ThisBlogThis!Share to TwitterShare to FacebookShare to Pinterest
Labels: Devon Monk, Magic in the Blood, Roc