The Heretic's Treasure by Scott Mariani 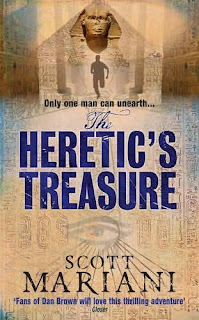 Ex-SAS operative Ben Hope has settled down in rural France – until an unexpected phone call shatters his newly-found peace. Egyptologist Morgan Paxton has been brutally murdered in Cairo and Colonel Harry Paxton wants Ben to find his son’s killer.
Ben is unable to refuse the man who once saved his life – but is torn when Harry asks him to avenge Morgan’s death. To make matters worse, he finds himself attracted to Zara, Harry’s new bride.
But searching for Paxton’s killer plunges Ben into one double-cross after another. His mission leads him from Europe to the banks of the Nile, climaxing in a terrifying showdown in the Sudanese desert.
At the end of the trail lies the ultimate priceless treasure, concealed from destruction during the reign of the ‘Heretic’ Pharaoh Akhenaten – a find that guarantees such riches that some people will murder to attain it…

There is much to admire about Scott Mariani's writing which goes from strength to strength in this the fourth Ben Hope book.

As a reader I have become quite spoilt by Scott's writing, his planning, attention to detail and the solid creation of his main character Ben Hope.

When we are reintroduced to Ben as he lives the quiet life in the rural countryside of Normandy, things are almost perfect and idyllic for him. His new career as owner of a renowned school where he could pass on his particular set of skills to employees of wealthy corporations when dealing with kidnappers, body guarding and contingency planning, seems to fit him to a t. He appears content, has a good relationship with his friend and colleague helping out at the farm and the minor interest from one of the on-off staff at the farm, highlights Ben's movement towards a healthy lifestyle.

Until a fateful phone call lures him away to meet with an old friend, the man who had saved his life back in the days when Ben was in the army. Colonel Harry Paxton calls on Ben to help find the murderers of his son and to bring them - brutally - to justice. Ben agrees to investigate the younger Paxton's death and sets off for Cairo, deeply conflicted, not just by his old friend Paxton Snr's quest for blood, but also torn about his growing affection for Paxton Snr's younger wife, Zara.

Ben does what he does best - he sniffs out a nest of trouble and catapults himself into a series of adventures that have horrifying consequences for himself and for the Paxton's. He struggles to survive the double crosses and the twists and turns his investigations reveal.

We follow him across the bustle of Paris, the quiet countryside in Normandy to the blazing sands of the deserts in Egypt and the Sudan. Each step of his quest becoming more and more dangerous.

If you've read any of the other Ben Hope novels by Scott Mariani and you've thought that he was harsh with Ben's character, you ain't seen nothing yet. Poor Ben - the stuff he goes through in The Heretic's Treasure is just eye-popping. But there is payback and once you close the covers of the book you sit back and heave a sigh of relief and thank your lucky stars Scott Mariani does not get to play God for a day with your own life. The man is devious and brilliant at exploiting the storylines to an inth of their lives. History and present day all combine to form a plot that will satisfy the hardest of thriller readers. A non-stop actioner of the highest calibre deftly woven to move Ben's story forward.
The Heretic's Treasure is out now and available in all good bookshops. Find Scott Mariani's website here. He is published by Avon, an imprint of Harper Collins.
Who wrote this? Liz at 9:48 am