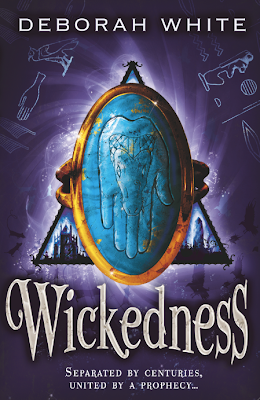 Wickedness is a thrilling adventure that combines history, fantasy and romance, from an exciting new voice in teenage fiction. It will appeal to fans of Hush, Hush and Twilight as well as fans of historical authors like Sally Gardiner and Mary Hooper.

Two flame-haired girls, both fourteen and living in London, but four hundred years apart. A powerful and charismatic man, an Egyptian mummy and twenty spells written in hieroglyphics on parchment. An emerald casket, a gold ring and a ropewalker. All are united by blood and by a devastating prophecy.

How could I say "no" to a) reading this and b) hosting the fantastic author, Deborah White, on MFB?  Again, it's like the book was written with me in mind.  Yes, I do strongly believe that my existence influences authors to write books for me, what's wrong with that?

All kidding aside, Wickedness is such a great concept and Deborah is such a fab new talent, we are exceedingly happy to have her on MFB to talk about the lenghts ladies and gentlemen went to in the 17th Century, when putting themselves together for a brave day of...lounging about, talking, gossiping and eating.

17th century make up by Deborah White
﻿
Bet when you put on your make-up you look in the mirror. Mine cost £8.35p. But in the seventeenth century glass mirrors with silvered backs were extremely expensive. (think £9,000 plus for a mirror 4’ by 2’). If you didn’t have that sort of cash then you might have to use a polished disc of copper, bronze, silver or stone. Mmn. Tricky. Could you really see anything?
Then of course there was the make-up itself….worn by men and women. A pale complexion was essential, because only rich people were pale (non of that horrid working outside in the sun and getting a tan.) But even staying out of the sun didn’t make you pale enough. So you might plaster your face with a cream made of powdered chalk…or lead mixed with egg white and vinegar. This made your face stiff…so no laughing please or your face would crack. Sadly lead, as well as having really serious side effects, also scarred the skin. So to cover up those unsightly blemishes you had to stick on patches (black taffeta or red Spanish leather) which ready gummed, really did come in all shapes and sizes. Imagine having a coach and horses galloping across your cheek.
Then if you looked in that mirror and thought, “Ooh maybe a bit TOO pale” well then you could rouge your cheeks with ceruse powder (lead powder again only with red colouring) or Spanish paper dyed red with cochineal. No lipstick …you had to use fruit juice or cochineal again.(from the crushed female insect of the same name.) Yum. And though there was no mascara…you could make your eyes sparkle by using belladonna. (one of the most highly poisonous plants known in the west) It dilates the pupils and gives you ‘bedroom eyes’…but can make you go blind. No need to worry too much about plucking eyebrows though…that ceruse powder made hair drop out. But that was OK… you could stick on eyebrows made of mouse skin. Fab.
﻿
﻿Then of course there were those other little problems: smelly breath or armpits. It was recommended you cleaned your teeth twice a day using water and salt. But if that wasn’t enough to stop the stink…soak rosemary blossom in white wine and add myrrh and cinnamon. (OK you still had smelly breath, but the wine mean’t you didn’t care.) For armpit smell… Hannah Wolley…the 17th century writer of guides such as The Queen Like Closet and The Ladies Delight, suggests plucking underarm hair, then washing with wine and rosewater boiled up with cassia lignum (aromatic bark).
Oh and cat poo mixed with vinegar was touted as the hair removal cream of the day. Lets not leave out puppy dogs though…their urine was supposed to be good for the complexion.
And finally….all the make-up in the world couldn’t halt the ravages of time. As the 17th century saying went “past her prime at twenty. Decayed at four and twenty. Old and insufferable at thirty.” Oh bum.
***
Unexplicably I am suddenly very much in love with the modern day and all my lovely make-up, especially as it does not contain poo.  Mouse-skin eyebrows? *shudders*
Be sure to check out the rest of the stops on Deborah's tour:

Wow, they really went to some lengths in their quest for beauty didn't they! Great post, really interesting to read.