The Atlantis Code by Charles Brokaw 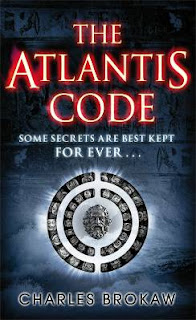 An ancient artefact is discovered in a dusty antiquities shop in Alexandria, Egypt - the long forgotten trinket soon becomes the centre of the most deadly archaeological hunt in history.

The 20,000 year-old relic is inscribed with what appears to be the long lost language of Atlantis. Only one man would seem to be able to decode its meaning - the world's foremost linguist, Dr Thomas Lourdes - but only if he can stay alive long enough…

Meanwhile, an earthquake in Cadiz, Spain, uncovers a most unexpected site - one which the Vatican rush to be the first to explore… Perhaps the lost city of Atlantis is finally ready to be found?

But is the world ready for her secrets?

I am a very determined reader. Even if it takes me three months to read, I'll try not to give up on a book. In this instance it took me a week. I kept picking it up and putting it down again, undecided about finishing it. In the end I left it as I did not have the time to dedicate to it as I have so much else to read.

The novel has so much going for it - a fantastic high concept, interesting sounding characters and evocative settings and it is my favourite kind of genre, a quest novel, action adventure and some dodgy people from the Vatican thrown in to boot.

The Atlantis Code did not work for me because of the author's use of language. It was stilted and archaic. The story did not flow, the characters' dialogue was genuinely tough to read as it was just too over the top dramatically. I could not suspend my disbelief and found some of the actions the characters take in the novel very hard to equate with them.

I can give the author his full due when it came to thinking up a good twisty story but the writing let the concept down - very badly. The main character was too perfect in many instances - there wasn't enough conflict within him and between others whom he meets to keep him interesting and the story going. There is also a devastatingly static love scene in the novel which had my eyebrows climbing into my hairline. And the bad thing is, I could tell why the scene was put in there! It was purely to prove that Thomas Lourdes was a dab hand (sic!) in the bedroom and to create a bit of interest between the two female characters which attach themselves to Thomas Lourdes.

It follows so many - now very old - tropes in the action adventure genre that even if it wasn't for the unskilled writing and odd turns of phrase used, I would still have been disappointed with it. There is nothing new here to explore. Admittedly the setting of what they assume is Atlantis is new but others have been there and done it so much better.

I hope that someone else with fresh eyes can pick this up and find merit in the novel. I am devastated that I did not like it - as regular readers know I am a sucker for these books and have got an entire two shelves dedicated to action adventure and quest novels.

I am in fact going to set a challenge - I am prepared to send my unfinished copy off to anyone who would be keen to read it and let me know their view. So, if you are interested in proving me wrong, let me know either by commenting or sending me an email and I'm happy to post this onto anyone anywhere, not just in the UK. I will also be happy to blog your review!

I have been unable to locate a website for the author and will therefore only be able to point you to Penguin UK's website which be found here. The Atlantis Code will be published in the UK by 4th June.
Who wrote this? Liz at 2:39 pm

You're more stubborn than me. I'd have stopped much sooner!!!

Its probably a bit late but I'd be interested in reading it. If you're still willing to send it on let me know, I'm in Ireland.

I agree with the comments and have dubbed this 'man-trash' as opposed to 'girlie-trash'. However, I intend finishing it as it doesn't require any intellectual input!

@Neil - hey there - yes, please do let me have your address, and I'll post it onto you next week.

I got through the whole book..it was ok I thought probably make a better movie than a book though

i'm just reading it now and i'm up to the last scenes. as far as dramatic suspense goes, i've got to say that i'm intrigued. i love all sorts of ancient history and legends, so reading about the origins of languages and the different legends that are interwoven have definitely piqued my interest. and i'm always a fan of those 'the church has a secret and there's a conspiracy surrounding it' stories.

while the writing may not be perfect and sometimes the story drags (geez, they visited half the countries in europe!), overall i thought it was a pretty enjoyable read. i've read better, but none about atlantis!

Man, The title really atracted me, but when I read your review I realised I wasn´t alone.
I think the author may have some kind of complex. The love scene was really unnessesary. The ultold truth is that Lourds carries with him a small mirror so he could every time watch himself on it.
And his name ....in Brazil Lourds is a girl´s name.
Ill finish the book though because I already didn´t finish Stephen King´s Blaze.

Ghastly on so many levels. High concept but having established that the dig has uncovered Atlantis, what more is there to discover?
The whole thing with the musical instruments is so messy - it takes forever to explain their significance at the end, why didn't he realise this wasn't working as an idea earlier on.
The travelogue is dull - and we learn nothing or feel anything about the places visited. All the characters speak identically no matter where they come from.
Little things like the main male protagonist being referred to as 'Lourds' (rather feminine) and the female being called 'Leslie' (spelling for both sexes) just causes confusion because - again - they speak the same.
As another contributor says here, the sex scenes are dreadful and forced.
I have to wonder what Penguin were thinking when this manuscript walked in the door.

It took me about a month to read this trash. An American University professor on the trail of ancient symbols with Romantic interest thrown in - a pale imitation of the world's worst pulp fiction author, Dan Brown, and blatant plagiarism, a thinly disguised and poor imitation of the dreadful "Da Vinci Code." Don't buy it unless you are serving a life sentence in solitary and are desperate for reading material.,

Thank goodness I'm not the only one who has found this trashy. I'm reading it as a collegue recomended it. I'm only half way trough and it's taking time because I'm dyslexic. Mr Brokaw seems to me to be writing the book as his own fantasy. The females are totaly unbelievable and a product of a male fantasy. I would point out that men also enjoy a good bargin. I find some of the attitudes to women insulting. An yes, Why are the males refered to by last name except Gary and the women by their first name? As a would be film maker. Please don't make this into a film as it's clearly what is behind the writers mind. He's writing this as if he were watching a cinema screen. Little point from an earlier chapter, people in the industry don't call them wires, they are cables. There are little mistakes everywhere. However, I was suprized to find some of the places and historical facts do appear to be true. I never liked the Da Vinci Code or Dan Brown and find this even worse. I have to tell my colegue this and I believe he enjoyed the book!!

After reading your helpful review and all the comments it seems that you are not the only one who had problems with this book.

That is the reason why I read reviews and comments.

US residents can win a copy of the book over at goodreads.

I was a winner of this book on GoodReads and I am having a really tough time with it. I'll be passing it along on paperbackswap.com to some "lucky" person. If any readers of this blog are members of paperbackswap.com (US residents only) contact me there and I will post it to your WL if you still want it even after this review. I'm "vampsita" on that site.

I am reading the book right now and like it a lot. Already googling the name of the author to see if he wrote more books.

I thought it was pretty good but all the comments and the review was realy interesting. Thanks

Hey there,
I got this book as a present,and I am glad I am not alone finding the main character horrible. I only read it because I was interested about the historical backround and to see where he the athor is going with it. I really have to struggle sime times. And I agree, it is like written to become a movie. The only character that is fun, is Natashya, who is Rambo in a woman's body. it's just funny how many people she shoots, never misses ( except when it comes to the big bad guy, of course), is always ahead of things, very angry...she is good fun, even if not realistic AT ALL. Lourds is horrible, Leslie also. The nicest character is actually father Sebastian. He I could imagine excisting. Still, I had some fun reading it. Wouldn't recomend it though

International intrigue is my genre of choice which I've been reading for 50 years and The Atlantis Code is without a doubt the worst POS I've ever encountered. It was truly dreadful. The plot is absurd; the characters one-dimensional; the dialog stilted. I could tell within the first couple of chapters I would be berating myself for finishing it, and I am.

I've never bothered to write a critique of any book but Brokaw's novel so thoroughly outraged me I sought out this site for ablution. However I am fascinated that some readers actually enjoyed the book. I can only imagine they are folks who also like the Red Lobster because they've never had decent seafood.

I found the book to be ghastly, it felt like a Da Vinci Code rip off to be honest.

It's probably too late now, but you'd still like someone to read your manuscript, I'd love to.