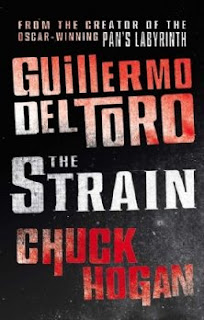 A plane lands at JFK and mysteriously ‘goes dark’, stopping in the middle of the runway for no apparent reason, all lights off, all doors sealed. The pilots cannot be raised. When the hatch above the wing finally clicks open, it soon becomes clear that everyone on board is dead – although there is no sign of any trauma or struggle. Ephraim Goodweather and his team from the Center for Disease Control must work quickly to establish the cause of this strange occurrence before panic spreads.

The first thing they discover is that four of the victims are actually still alive. But that’s the only good news. And when all two hundred corpses disappear from various morgues around the city on the same night, things very rapidly get worse. Soon Eph and a small band of helpers will find themselves battling to protect not only their own loved ones, but the whole city, against an ancient threat to humanity.

Budding authors and existing authors in the horror and thriller genre, do not need the competition which Guilermo del Toro and Chuck Hogan created when they decided to tackle the vampire myth in their co-written novel, The Strain.

On The Strain website, there is an candid little video of Del Toro chatting about the concept behind the novel and I groaned inwards when he confessed that he collects vampire lore, it is one of the things he is passionate about. I groaned because I realised that even though I loved The Strain and was scared out of my tiny little mind, the next two follow-up novels are going to be equally insane and tense. I don't think I'll be able to cope.

The small group of people we follow in The Strain are average every day people who are asked, by the reappearance of something very old and evil in this world, to dig deep and become fighters on the side of humanity.

The novel is penned with great skill and the characters are brought to life in "show not tell" ways which is fascinating to read. We focus on Ephraim Goodweather for a section of the novel, getting to know him well. We are shown that he is a damaged hero, one with issues; an ex-drinker now dedicated to make the most of spending time with his very bright son, Zack, whilst fighting a running battle with his ex-wife and her new partner, and struggling to put a name to the relationship he had struck up with co-worker Nora. A complex hero and a likeable one.

My favourite character, the one with the most allure and an enigma, is the elderly Abraham Setrakian. Abraham holds the nexus of the story in the palm of his gnarled hand. He knows what they are up against. He knows because he had met this creature before whilst in a concentration camp in Poland. He has hunted the creature all his adult life becoming haunted by it, preparing for it. He appears unhinged when he first meets Ephraim but soon they are thrown together in their quest to uproot and kill the creature which destroyed all the passengers on the plane. His intimate knowledge of the vampire is invaluable and his presence of mind and logical ways during this highly unlogical time is well portrayed.

The story moves along at a tremendous pace. The reveals are done in a considered way, drawing you into the cinematically written storyline. I think, the most terrifying aspect of this novel is how real it appears - vampirism is seen as a disease, a virus that if not checked, will run rampant and destroy the world. It strikes a particular grim chord, especially considering the paranoid times we live in at present, with the continued fear of AIDS, SARS and Swine Flu and any other illness which you can get by human contact. It is an all too real fear and that is where the horror aspect of The Strain comes in. It explains the supernatural in terms of science and people, it is terrifying.

Del Toro and Hogan have plundered European folklore for the history and creation of their vampire mythos. It is, as expected, thorough and intriguing and compulsive. The horror is not Hollywood gore and splatter, it is contained, personal and intimate. They have stripped the vampire down to the terrifying creature he was since legends of blood drinkers surfaced in ancient Greek times. It is not romantic, it is terrifying and illogical, self centred and wholly on a quest to break the pact it had created with other Immortals back in history. It is keen on a war, humanity is firmly set between him and the very small group of ancient vampires still alive. And he is happy to destroy all of humanity for his own purposes.

The Strain is highly recommended as a read and the only sore point is having to wait until the next book in the trilogy is released!

The Strain will be released on 2nd June here in the UK by Harper Collins. Find the official website of The Strain here.
Who wrote this? Liz at 8:38 pm

Holy crap. This sounds awesome. Although I did squeamishly "Eeee!!" as I read the synopsis!

I'm so glad this isn't a disappointment (not that I ever thought it would be, coming from GDT). Can't wait to get my copy from the man himself in London!!!

Your review is awesome! I added the book to my list some days before.
I hope there will be a paperback release soon.