The Lost City of Z: A Legendary British Explorer's Deadly Quest to Uncover the Secrets of the Amazon' by David Grann 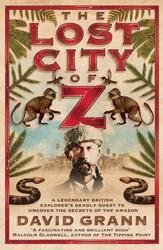 Colonel Percy Harrison Fawcett was the last of a breed of great British explorers who ventured into 'blank spots' on the map with little more than a machete, a compass and unwavering sense of purpose. In 1925, one of the few remaining blank spots in the world was in the Amazon. Fawcett believed the impenetrable jungle held a secret to a large, complex civilization like El Dorado, which he christened the 'City of Z'. When he and his son set out to find it, hoping to make one of the most important archeological discoveries in history, they warned that none should follow them in the event that they did not return. They vanished without a trace. For the next eighty years, hordes of explorers -- shocked that a man many deemed invincible could disappear in a land he knew better than anyone, and drawn by the centuries-old myth of El Dorado -- searched for the expedition and the city. Many died from starvation, disease, attacks by wild animals, and poisonous arrows. Others simply vanished.

In The Lost City of Z, David Grann ventures into the hazardous wild world of the Amazon to retrace the footsteps of the great Colonel Fawcett and his followers, in a bracing attempt to solve one of the greatest mysteries. It is an irresistibly readable adventure story, a subtle examination of the strange and often violent encounters between Europeans and Amazonian tribes and a tale of lethal obsession.

I grew up with Indiana Jones – I wanted nothing more than to be an explorer and an archaeologist or an anthropologist, discovering ancient lost things and mysteries, finding lost tribes and learning about them. In fact, I dug up our backyard for years keen to find a lost treasure. I went so far as to bury some of my toys and then a week later I would dig around to “rediscover” them. My parents despaired. I lost a lot of toys. In fact, I still mourn my box of smurfs I hid on a beach in Durban all those years ago! Upon our return a year later the entire beach had been landscaped and my smurfs were gone!

When I received Lost City of Z from S&S I was initially not that keen to read it – I thought, bah humbug, search for El Dorado, done, done, done – it cannot be anything new. But then I read the blurbs, did some googling on the main character of Fawcett and fell under the sway.

Lost City of Z is the story of writer David Grann (who presents himself in a very humourous, non-heroic fashion to the readers) in pursuit of the legend that is Percy Fawcett who in turn was a British explorer at the turn of the 19th century.

Fawcett’s obsession was the Lost City of Z (a term he coined) – we know it as El Dorado - was all consuming. He became paranoid, keeping his diaries and the place he thought it would be, hidden from everyone, even his family. In the early 1900’s Fawcett walked into the jungles of America and off any known map. He disappeared without a trace. There were clues though – several in fact, about the route he took. Initially the world waited with bated breath – here was a true adventurer – stoic, heroic, stubborn and almost superhuman when it came to endurance.

Before setting off on his last journey, Fawcett mapped several remote areas on South America and came home victorious – if a lot thinner with a reputation. As much as he appeared in public as an amazing explorer and wayfinder and mapmaker, he was also an intensely personal man, which I think, helped keep his legend alive.

David Grann’s description of his journey and who he is, is an honest one – he states: “Let me be clear, I am not an explorer or an adventurer. I don’t climb mountains or hunt. I don’t even like to camp. I stand less than five feet nine inches tall and am nearly 40 years old, with a blossoming waistline and thinning hair.” More honest than that, you do not get.

We follow David on his hunt, as he tracks down the real Fawcett. What I thoroughly enjoyed in this book, is how he got into Fawcett’s mind. Yes, there is conjecture, but it is all based on common sense and supported by factual letters and other papers held by various people (including papers held by Fawcett’s remaining family members).

The resulting and incredible research, the dedication to detail, the conversational tone of the book and the author’s own adventures make for gripping reading. The author touches on what can only be called mythic anthropology during his journey – conjecturing on the fates of forgotten explorers who in turn went searching for Fawcett and El Dorado / City of Z and hoping to find those elusive the lost shadowy tribes of this dense jungle.

As important as Fawcett and his expedition is to Mr. Grann’s story, what looms and overshadows and takes centre stage is the amazing jungle which seems to swallow everything before it. We read about other badly managed expeditions into the jungle where one or two survivors managed to make it out – close to death, with horror stories of being eaten alive by insects as they were traversing this dark and dangerous place. So much happened back in the early 1900’s – it was the time of the amateur adventurer, the gentleman soldier – and Grann serves to cut through the gloss down to the bone of the matter, stripping the veneer of Victoriana away, revealing the hardships and horrors these men had to endure, during the race to map and explore the furtherest reaches of our known world.

The book is a hugely entertaining read – shocking, illuminating and beautifully written. No wonder it’s being turned into a movie (starring Brad Pitt). I kid you not. Read it now, before everyone else does – read it because this is what adventure writing is really about.

David Grann’s journey into the jungle and his search to find Fawcett is plainly said one of the best reads I’ve had this year when it comes to non-fiction or rather non-fictional writing. Non-fiction has the bad rap for being dry and boring and dull and only good to buy for parents or friends you don’t like. I think David Grann manages to pluck that image out of our heads and trample it in this instance.

It is the perfect summer read and one that will make you look at books written during this time by Rudyard Kipling, Arthur Conan Doyle, Robert Louis Stevenson, Jules Verne, Lord Dunsany and a host of others with fresh eyes. They lived in a time when people like Fawcett became legends to content with – real men of discovery who made fictional stories appear pale by comparison.

Find David Grann’s site here. The Lost City of Z can be found here at Simon and Schuster, his UK publisher’s site or in any good bookstores. David's also written a very interesting and in depth article for the Telegraph which can be found here. And I am happy to report that Lost City of Z has been nominated for the long list and chosen for the shortlist for the Samuel Johnson Prize with the winner being announced on 30th June 2009. Hold thumbs - Lost City of Z must win!
Who wrote this? Liz at 4:28 pm