One of our favourite new British horror authors, Bill Hussey, took some time from his very busy schedule to stop by and chat to MFB. We are also lucky enough to have a chapbook to give away as produced by Bill and his two other partners in crime, Joseph D'Lacey and Matthew F Riley. The chapbooks are a limited edition of 200 and they are signed by all three authors. Check the Competitions column for info on how to enter. 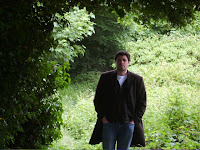 Hi Liz & Mark! Well, my name’s Bill Hussey and I write horror fiction. Whenever I say that it sounds like I’m attending an intervention and that I’m admitting to a particularly foul weakness!

Well, my ‘career’ started just last summer when ‘Through A Glass, Darkly’ hit the book shelves. Up until that point I’d dabbled at being a writer - dabbled seriously, but dabbled nonetheless. I took an MA in Creative Writing at Sheffield Hallam University and bagged myself an agent pretty quickly. My agent was very enthusiastic about ‘Through a Glass’ but with one caveat - horror just wasn’t being published at that time. The rejection slips started pouring in and bore out his words – lots of very nice messages, all saying the writing was great, but that the market just wasn’t there any more.

Frustrated, I slipped back into a career in law – yawn – and then the telephone rang. My agent had found a great new publisher who had just started a horror imprint. Nine months later ‘Through A Glass’ was in Waterstones and Borders and picking up some very nice reviews. Another nine months on and ‘The Absence’ is out. It seems strange, after all these years of trying, that I have two books out in less than a year!

Well, I’ve got a YA (Young Adult) horror/adventure novel currently being considered by my agent. I won’t say too much about it – I’m superstitious that way – but it tells the story of a coven of really nasty witches, a secret society sworn to defend mankind, and has a scene in which a cat is sliced in half by an acid mist! All good clean fun, kids!

Lots of things, I guess. There’s something pretty ingrained in the human psyche that gets a kick out of being scared. Not everyone enjoys it, but those of us that do must be closely related to those early hunter-gatherers who enjoyed taking that unnecessary extra step into the orbit of the sabretooth. In a writing sense, I’ve always enjoyed the fact that, in horror, perhaps more than any other genre, you can push your characters to the extremes of the human condition. Like fantasy and sci-fi, it is a great ‘what-if’ genre. But with horror that ‘what-if’ is more of a psychological question than one of technology or pure make believe. You put characters in these hideous situations and see how it plays out. Horror is also allowed to go full throttle at those great existential questions – who are we? What are we doing here? What waits beyond the veil? We’re all fascinated by those questions and dark fiction perhaps allows us to catch a glimpse of the answers.

It’s like those four things a bride needs on her wedding morning: Something Old – I don’t mind, in fact I quite enjoy, a dose of the familiar in horror. As with any fiction, there really isn’t anything entirely new under the sun. We keep going back to the familiar tropes – the haunted house, the vampire, the restless ghost – because we love them so, but… Something New – let’s try to find something a wee bit new to do with them. Come at them from a slightly different angle; confront them with very modern characters… Something Borrowed – as with something old, we writers of dark fiction inevitably borrow a bit from the masters who have gone before us. That’s not to say we should steal, but I think a gentle homage is acceptable. When I wrote ‘The Absence’ it was obvious that something of Stephen King’s ‘The Shining’ would come through. That said, I think King has acknowledged the debt that book owed to Shirley Jackson’s ‘The Haunting of Hill House’. I think that, as long as we create a fresh cast of characters to confront these ageless situations and dilemmas, then that’s fine. Finally, Something Blue… erm, I’m stretching here! Well, a little sex is always a good thing in horror! What is a horror story except a battle between death (the ghost, the axe-wielding psycho, the plague of killer rats) and life (sex) – that disturbing scene towards the end of Stephen King’s ‘IT’, in which the kid characters try to escape the sewer, comes to mind…

Oh, lots and lots. My main influence as a ghost story writer has always been MR James. I’m not sure that those quiet terrors could be completely replicated for today’s reader, but I have tried to inject a bit of Jamesian antiquarian disquiet into my books. I also love Shirley Jackson, Robert Aickman, Stephen King, Clive Barker… One of the lesser-known writers that I picked up in the 90s and absolutely loved was Jonathan Aycliffe. He’s not that widely known, but I think his ‘Naomi’s Room’ is just about perfect. Neil Gaiman’s another genius wordsmith who has quite obviously had a big influence on me – compare and contrast ‘American Gods’ and ‘The Absence’ and you’ll notice a thematic Something Borrowed! Outside the genre, I read and re-read Truman Capote – his almost-ghost-story ‘Miriam’ has to be one of the most chilling things I’ve ever read, and, of course, ‘In Cold Blood’ is a breathless masterpiece. Comics-wise, it has to be Gaiman again with his ‘Sandman’ series – the idea of a serial killer convention is pure genius! Obviously, Alan Moore is the godfather of modern comics.

Movie-wise, I love 80s ‘schlock’ like Friday the 13th, Nightmare on Elm Street, all the Romero movies, the giallo and supernatural movies of Dario Argento, Robert Wise’s film version of ‘The Haunting.’ ‘Pan’s Labyrinth’ and ‘The Orphanage’ were great last year – I’m a big Del Toro fan. I really liked Lars Von Trier’s ‘The Kingdom’ – impenetrably brilliant! – plus it taught me a lot about Nordic politics!

See all of the above! I’ve not yet met any of those people (some are now sadly deceased) but I’m sure I’d be a jibbering wreck if I did!

Once I got over being a jibbering wreck? I think I’d invite King. He’s the All Father of the genre, isn’t he?

OFF! Lights on? Goodness me!

Originals. Although I very much enjoyed Zack Snyder’s remake of Dawn of the Dead, I just don’t approve of running zombies. I’m an old fart that way. I agree with Simon Pegg on this - Romero’s zombies had a poetry and pathos that the triathelete zeds of today just don’t possess. In fact I blogged about it on Horror Reanimated, (Rules of the Living Dead or Should Zombies Run). I was very quickly shouted down!

Hmm. You know, this applies to all writing, but my lecturer on the MA in Writing was the novelist Jane Rogers (Mr Wroe’s Virgins), and she really instilled in me that old adage – to write is human, to edit is divine. That’s the best advice for any writer – keep redrafting – you’ll know in your gut when it’s right to stop.

Who knows? I hear a lot about zombie horror/post apocalyptic horror being the future. But there are always cycles. One thing I can guarantee – the pure ghost story will never go out of fashion because it speaks to something primal in all of us – the hope and fear of what lies beyond the veil...

I would just throw myself into the marauding, blood-thirsty horde. I’ve watched enough Romero to know that there is only one thing worse than being torn apart by zeds – and that’s surviving. Get it over and done with quickly, say I! Anyway, a world overrun by zombies would mean I’d never get to see Steven Moffat’s version of ‘Doctor Who’ – why bother living?!

Two – Stephen King’s ‘On Writing’. After reading that you should be all set. The other is Robert McKee’s ‘Story’ – which is a how-to on screenwriting, but it has really important things to say about structure and character that can be used in novel-writing too.
Who wrote this? Liz at 11:28 am

Great interview! Hussey is also one of my favorite authors!

Also, too bad that the chapbook competition is UK only. I'm determined to get a hard copy of this chapbook here in the States...