The Tiger Warrior by David Gibbins 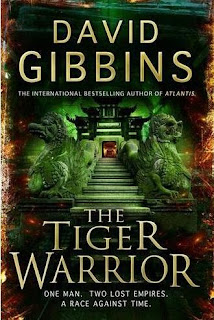 
India. 1879. Lieutenant John Howard witnesses something so unspeakable it changes him for ever. His subsequent disappearance is never solved. Egypt. Present day. Marine archaeologist Jack Howard makes an astonishing discovery on a deep-sea dive. What's the connection? Jack Howard doesn't know yet. But he's about to find out.


This isn't just a treasure hunt; it's a desperate search for the truth. A truth that will unlock the mystery of Jack's great-great grandfather's disappearance. A truth so compelling Jack's pursuit is almost unstoppable. Almost. A formidable enemy from Jack's past has appeared in his present, and this enemy will stop at nothing to protect its earth-shattering secret.

David Gibbins offers us the new Jack and Costas adventure in an immaculately turned out novel which, apart from the treasure hunt (!), the action adventure, the intense research and historical scope, focusses strongly on family - past and present.

Before I continue with my review, I just need to say the following: In their previous novel Jack and Costas met up with one of Jack's old flames and it turned out that she had kept a secret from Jack - they had a daughter together. Elizabeth (the old flame) revealed the existence of Rebecca and the reasons why she had been kept secret from Jack and the rest of Elizabeth's corrupt and dangerous family. Elizabeth died, leaving Jack the sole parent of a girl whom he had never met before.

The review: fast forward a few months after Jack and Rebecca had met and we see them as a small family unit, with Jack a bit uncomfortable in his role as a new father, a bit possessive of his daughter, a bit amused, a bit scared and wholly enamoured with her as she is funny, highly intelligent and a quick learner. She also has an aptitude for the business (archaeology) and a keen eye for detail and a swift mind to unravel problems. She quickly becomes a favourite of the crew of the Seaquest II and it is a testament to David Gibbins' skill that he keeps her character from becoming annoying and precocious. She appears fully formed in the novel, very much her own person, with her own set of skills. She compliments both Jack and Costa and offers a softer perspective on their adventure. This is something I thoroughly enjoyed in the novel. It has given it a rounder more multifaceted edge and it allows the characters and Jack and Costas to show a different part of their personalities.

The Tiger Warrior is much more a character driven novel than any of the other David Gibbins books I have read in the past. The Jack and Costa camaraderie is still there and it is an easy one but there is a new depth to them and the historical characters we learn about. We spend some time with John Howard in a parallel story set in 1879. He is Jack's great grandfather and his deeds in India have left several questions unanswered and a mystery of sorts. Using John's diary and an in depth knowledge of regional history in India, Jack and Costas piece together an intricate puzzle which includes a band of Roman soldiers traversing the Silk Road after escaping from enslavement, right up to modern times where a group of Chinese warriors are doing everything in their power to regain their lost treasure. Whereas in The Lost Gospel you found yourself maybe slightly distanced from the action as the historical characters were that remote from us, in The Tiger Warrior the history is more recent, almost tangible and easier to research and relate to. It deals with the Great Game so many of the nations played in the 17 / 1800's and it brings home the atrocities committed in the name of colonial expansion and how those repercussions can still be felt in some areas today.

It is an exhilerating read - if you've read David Gibbins before you will not be disappointed as the exposition is there, how Jack sits down and spins a tale of a discovery is amazing to read and one of the best things in the book which I thoroughly enjoy. If you've not read his work before, The Tiger Warrior is easy enough to pick up and start reading. And you will no doubt want to make sure you pick up all the other books too as they are that compulsive.

As always, Gibbins relishes the research and the history and the novel is packed with amazing tales and supposition and I make a point of examining how he relays the information between the characters. It is an important part of the novel, keeping the dynamic going, whilst having to be informative. He seemlessly blends history and fiction and current events into a smorgasbord of dynamic summer reading.

David Gibbins' site can be found here. The site is currently undergoing renovation (I almost wrote excavation...) and although there is a lot of info on there, the new site is set to be larger and more comprehensive. The Tiger Warrior is now available in all good bookshops and online and is published by Headline in the UK and has been available in the States for a while already.
Who wrote this? Liz at 10:11 am

Thanks for the heads up! I was looking forward to Jack and Rebecca's meeting and hopefully the book will satisfy my craving.