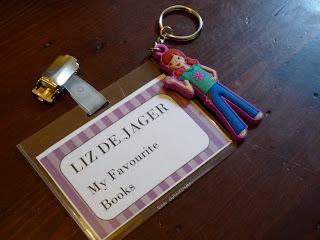 Along with a whole bunch of other bloggers, that girl Kaz Mahoney and I went to visit Random House Kids' office in Ealing Broadway earlier today.
We were ushered through to the "secret basement meeting room" where a handful of other bloggers were already neatly ensconced. It was fab to put a face to Nayu as she and I are forever chatting on Twitter and via the blog - it was great to meet her in Real Life too. I also got to meet Caroline from Portrait of a Woman website, a new to me blogger but one I think I will be watching closely as her reviews are pretty darn cool. The lovely Bookette (Becky) was there too and a whole swathe of others - I will be updating this blog with links to everyone's blogs, as soon as I can, I promise. 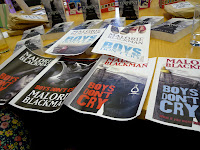 Once everyone was there, Clare, the publicity director welcomed us all. I think she sensed how wildly excited we were being there and handled all our shining faces as we stared at her with open hunger very well. First up Lauren (senior press officer) chatted to us about the covers for Malorie Blackman's upcoming novel Boy's Don't Cry. Just look at these pictures! They eventually decided on the cover on the bottom to the right.
Claire chatted about the new upcoming Terry Pratchett novel and she had a very appreciative audience. It was like we were at a panto, actually - a lot of OOOOH and AAAAH went around the table.
We had Corinne talk with passion about The Necromancer by Michael Scott which really has me deeply interested. She won me over when she explained how he used a lot of mythology and legends. I need to get hold of the other books in this Nicholas Flamel series because I think it's right up my street.
Well, I think it's easier if I put this picture up and you will be able to see what we got talking about, then I'll upload more photos and give commentary about the books and such, it will make more sense. 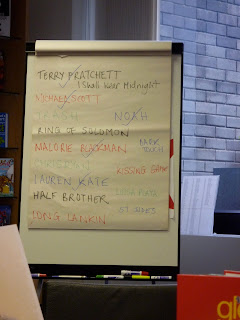 From the names / titles of books listed on the flipchart I am particularly excited about Ring of Solomon, Dark Touch, and Long Lankin. 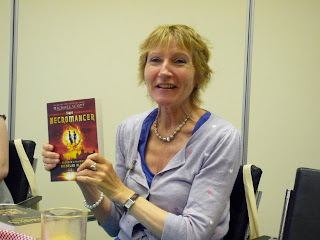 Corinne showing off The Necromancer by Michael Scott. 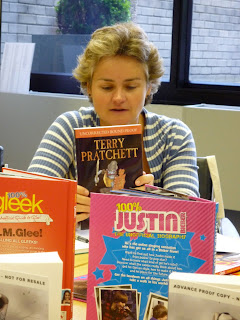 Claire enthusing about a new Terry Pratchett. Notice the Justin Bibier book and the Gleek book. I have Gleek to review. So be very afraid. 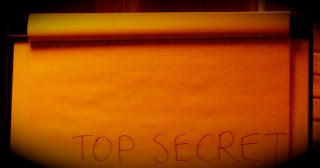 Oooh, top secret things were revealed to us. Shhh. You may not ask what was revealed. We were all given ninja lessons to guard these top secrets very well until we can share. 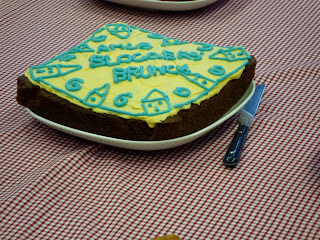 Of course there was some utterly delicious cake to be consumed. Books and cake and strawberries and snacks. RHCB can be glad they managed to get rid of us! 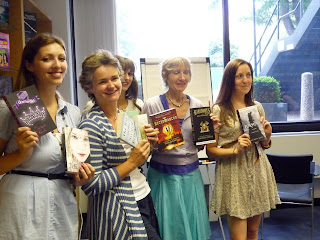 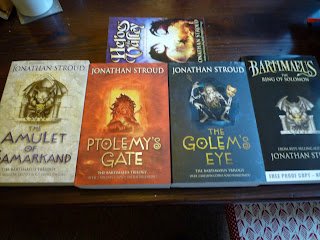 Loot 1 - All the Jonathan Stroud books I could lay my greedy little mitts on. Om nom nom! 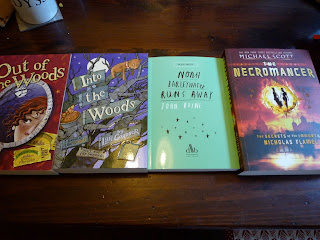 Loot 2 - some books for younger readers which I am keen to review, also a teaser glimpse of the NEW John Boyne. Oh, and Michael Scott's The Necromancer. 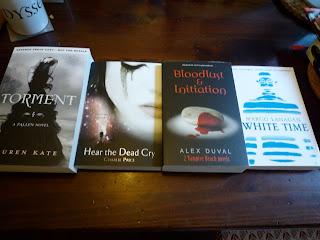 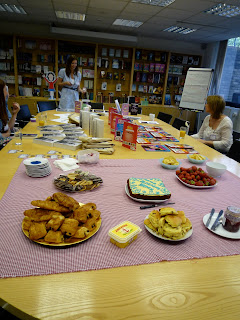 And to round off, the teaser shot of the cake and snacks the team laid on for us bloggers. How lovely and delicious?
We were taken upstairs to their offices (some which were beautifully tidy) and we were let loose on their shelves. Muah ha ha. Little did they expect the scary locust-like process we were planning for weeks on end. Actually, it was more like an orchestrated Oceans 11 swoop and grab operation, to be honest. All of us had to beg for extra carrier bags to carry all our loot home. We left, feeling utterly spoiled and very brat-like. I fear to say: we were gloating.
We had an absolutely blast and it was so great being able to dawdle and ask questions of the team about upcoming books, content of books, storylines and such. It was a fantastic opportunity where we could see behind the scenes of the labyrinth otherwise known as the Random House offices in Ealing Broadway.
To Clare, Lauren, Corinne, Rosie and Kelly: thank you so much for taking time out from your Saturdays to invite us over to squeal over books. You have made a group of bloggers very happy indeed.
Who wrote this? Liz at 7:22 pm

Sounds like a truly wonderful event, I am mad with envy, but of course very happy for you as well :D

I think you'll enjoy the Nicholas Flamel series, they're a lot of fun - can't wait to have a peek at Necromancer when it comes out, I didn't even realize he had another series, yayyy.

The cover for Torment is pretty fabulous, I can't believe you got to squee about new Terry Pratchett, and WOOO more Jonathan Stroud! Soooooooo cool :D

dude mega coolness!!! we need events like that in the UK!

see and thats how much of a dufuss i amit was in the UK how did you get to go to them!!! would love that opportunity

Okay, so if you can see a green tinge on the horizon, when you look to the north, that's my jealousy breaking free! ;)

Seriously though, sounds like a fantastic event, I'd have been all over the Terry Pratchett book!

It looks (and sounds) like a fab day! I love all the RHCB ladies :)

That was a truly great event. You totally need to remind me of the title of the graphic novel you were recommending to everyone at the end, too.

Wow! You remembered so much. I wish I had taken notes especially about the titles coming out next year. It was great to see you again. One of these days we will actually get to have a proper conversation at an event :-)

Wow! Sounds like a very exciting day. There should definitely be more of these events in the world!

Also, I'm so glad that I found your blog - it's great to discover other UK bloggers and you've linked me to more. Hurray!

Yay, great post Liz! SUCH a great day and it was a nice surprise to meet you IN PERSON :). Hopefully see you again soon!x

Wow, am I jealous. That all sounds and looks fantastic. And all those great books you took home. Again, wow.

Hi Liz, it was lovely to meet you on Saturday - what a fab morning! I hadn't actually visited your blog before but I'm now a new follower :o)

Liz I cant tell you how jealous I am. It looks fantastic. Great post. Thanks for sharing even if I have turned green with envy :D
The Nicholas Flamel Series is fantastic - I am waiting to lay my hands on The Necromancer. I cant believe you got Torment. Enjoy :D

This is a cool blog. Blogging related to kids is what I do, I really appreciate your effort on doing this because I definitely feel the passion of giving the kids the best.