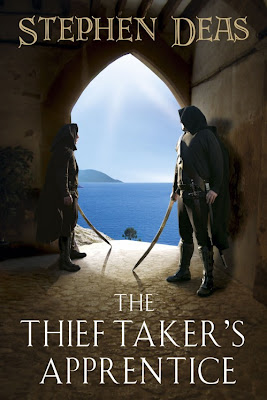 Berren has lived in the city all his life. He has made his way as a thief, paying a little of what he earns to the Fagin like master of their band. But there is a twist to this tale of a thief.
One day Berren goes to watch an execution of three thieves. He watches as the thief-taker takes his reward and decides to try and steal the prize. He fails. The young thief is taken. But the thief-taker spots something in Berren. And the boy reminds him of someone as well. Berren becomes his apprentice.. and is introduced to a world of shadows, deceit and corruption behind the streets he thought he knew.

We meet the young Berren as he worms his way through the crowd of spectators who have gathered to watch an execution, helping himself to a few purses en route. It’s there that he spies the man who brought the prisoners to justice, and sees the fat purse given to him, a purse containing a veritable fortune.

Berren finds his attention flitting between the spectacle of the executions and the bulging purse, and somehow he finds himself following the thief-taker.. It’s the start to sometimes rocky relationship, one that ranges across the tangled streets, knifeblade alleys and teeming squares of Deephaven as Master Sy begins to reveal hitherto unknown facets of the city Berren's known all his life.

Berren’s a genuinely interesting character; he’s a thieving, skittish boy, his cynicism the product of a life on the streets. It’s what he’s grown up with, and siding with the thieftaker doesn’t mean he’s going to change his ways overnight. It’s no easy transition either; conspiracies aside, some of the members of the gang Berren has to walk away from aren’t all too happy with his new found apprenticeship, and find very pointy ways of making their displeasure known. It's a thread that insinuates itself into various aspects of the story and Berren's development, and is deftly handled.

His character develops organically as the story unfolds, shaped by the events he finds himself caught up in and the grim realities that are an integral part of his new role. It’s subtly done, and the moment when he passes beyond the threshold of his childhood is both poignant and bittersweet.

What I liked about the storyline, aside from the bumpy relationship between Sy and Berren, is that it didn’t stray too far into the realms of the fantastic. Yes, a magical heritage is alluded to, but the meat and gravy of the story is the investigation into a smuggling ring, carried out in a gritty, stab-you-in-the-kidneys environment that makes the scattered allusions of something fantastical glitter that much brighter; I get the feeling Stephen is laying of the groundworks for more of a spectacle in the next instalment, but this subtlety is well suited to the story at this point.

Taken with Stephen’s sharp dialogue and the rich setting, this is a cracking fantasy that deserves to be widely read and enjoyed.