Horror Blog Fest - Allyson Bird nestles in for a chat

Mark and I got to meet Allyson Bird this year at Eastercon and after several long chats I got her to agree to take part in the Horror Blog Fest. We did a review for Bull Running for Girls a while back and I knew I had to pick her brains a bit! And in her own words...

1) Please introduce yourself and tell us a bit more about you and your writing career.

Allyson Bird is my name and I live on the edge of the South Yorkshire moors in England.

My short story collection Bull Running for Girls (for adults) has been published by Screaming Dreams Press and has been recommended for The British Fantasy Society awards http://www.britishfantasysociety.org/ for best collection 2008 and my short story The Caul Bearer has been recommended for best short story. The story can be found on the Screaming Dreams website as a rather cool Issuu flip-book or PDF. http://www.screamingdreams.com/

The cover is by the artist Vincent Chong and the process of getting to the final artwork was a wonderful experience. I gave him a photo of Diana Rigg in The New Avengers and we developed it from there.

I’ve always written but after my mother died recently I started to write short stories to work my way through the grieving process. I spent many long nights at the computer due to insomnia and sometimes in floods of tears. It didn’t end there. Last year my sister Sylvia died too and with the deadline fast approaching for the collection to be finished I once more turned to horror to relieve my darkest fears and nightmares. I wrote through fear of death, anger at many and was amazed that I got through it all. Now the book stands as a tribute to my strong and fascinating women.

I kept this in front of me as I wrote.

‘To live is to war with trolls
In the holds of the heart and mind;
To write is to hold
Judgement Day over the self.’ by Henrik Ibsen.

2) What is your most recent novel about – if you are allowed to tell us?

My novel Isis Unbound is under consideration by a publisher at the moment so I can’t say much about that. Hope to soon though but I can talk about Bull Running for Girls which is a selection of adventure-horror stories set in many locations, from the excitement and danger of bull running in Pamplona, to small town life in Madison County U.S. Stories set amidst the bustle of Hong Kong and under a hunter’s moon in Bordeaux. It is about women protagonists who ‘seize the day.’ The collection explores innocence and experience. Not all the main protagonists are female, and some of them aren’t even alive. Bit of a blurb there.

There are 21 stories in all so too many to mention here but The Conical Witch and Medium Strange are set in Penistone Yorkshire, although names and locations have been changed to protect the innocent…In the Hall of the Mountain King, The Bone Grinder and Wings of Night are all set in Manchester. On Shadow upon Shadow. When Alice Harwood committed adultery she expected to pay for it one day but the form and manner of that payment touched the essence of evil. Quote from Ramsey CAMPBELL. ‘A Dark tale indeed!’ In the Wake of the Dead: set in nineteenth century Sligo where magic and ritual have terrible consequences for the occupants of Elsinore House. ‘A potent brew of historical facts and gruesome imaginings.’ Simon CLARK.

3) What do you think makes the horror genre so fascinating to readers and writers?

I’m quite a personal writer so I never hold back within the narrative therefore there is quite a lot of thinly-disguised autobiography in some of the stories. I look for that in other writers and some sort of challenge for the mind and to the senses too. One such writer is Herman HESSE and in particular Steppenwolf which I read at a pivotal time in my life and it really made me think about human nature. Reading Lisa Tuttle’s A Nest of Nightmares recently has done the same. The isolation of protagonists and their relationships come to mind – especially those of siblings which I’ll return to time and time again. Readers look to identify with characters – sometimes even to see them go through worse ordeals than they do in their everyday lives. People read horror for escapism, identification with emotion – for all sorts of reasons.

Horror is ‘any medium which intends to scare, unsettle or horrify.’ If we just take the last 2,000 years we could mention revenge tragedy written by the Roman stoic philosopher/dramatist SENECA and also OVID both mentioned as being sources for SHAKESPEARE’S Titus Andronicus (one of the more famous full blown blood bath revenge tragedies, cited as having been written during Shakespeare’s Quentin Tarantino period). In this play we have rape, murder, and so much mutilation that the Victorians put it to one side. It has seen a revival lately and was put on at the Globe Theatre in London 2006, directed by Lucy Bailey.

Think about original fairy tales for children – quite gruesome sometimes, told perhaps as a warning to children and so for didactic reasons there is the good old fashioned ghost story too. DICKENS wrote A Christmas Carol (by the end of that tale Scrooge indeed treated people a little better). Oscar WILDE—The Picture of Dorian Gray. There are always consequences for usurping the natural order of things. Be careful what you wish for— for indeed it may come true; The Monkey’s Paw by W. W. JACOBS comes to mind. Be careful what you dabble with, it might just come back to haunt/kill you—Frankenstein by Mary SHELLEY.

Exotic places and travel are often featured in weird tales. We have stories set against a background of ‘arctic ghostliness’ in The Captain of the Polestar by Arthur Conan DOYLE. A quote from TENNYSON, ‘nature—red in tooth and claw,’ aptly introduces a story by David MORRELL called They. Incidentally this story which appears in Best New Horror 18, edited by Stephen JONES focuses on the creatures that I am most afraid of—snakes.

We could look at the gothic novel Northanger Abbey by Jane AUSTIN, Wuthering Heights—Emily BRONTE. Lovecraftian cosmic horror—which explores our place in a chaotic universe. In The Willows by Algernon BLACKWOOD travellers camp by the Danube river in the worst spot possible where another dimension touches our own.

H.P. LOVECRAFT can conjure up more identifiable characters such as the witch in The Dreams in the Witch House. Robert AICKMAN—simply read any strange story by him. Fritz LEIBER presents us with 1970’s modern eerie scariness in Our Lady of Darkness.
There are writers who explore reality and madness, Robert BLOCK’S Psycho. Silence of the Lambs by Thomas HARRIS and One Flew over the Cuckoo’s Nest by Ken KESEY. Alice SEBOLD’S Booker prize winner, The Lovely Bones. This one is a compelling read about the murder of a child.

5) What movies / books influenced your development as a genre writer? Similarly, what books, movies, comics, get you excited as a fan?

When I was younger films like The Poltergeist, Quatermass and the Pit, Dr Who, the witches in Macbeth, Stephen KING’S Salem’s Lot, any ghost story on the telly would do it and now the more traditional work of LOVECRAFT, the strange stories of Robert AICKMAN and watching the news does the same. Horror is a part of life, whether it is going through the harrowing experience of nursing a dearly loved sick relative or facing the fears that dwell deep within our own minds.

Joe R LANSDALE serves plenty of humour with his horror in this little novella, Bubba Ho-Tep, where an ancient mummy is terrorizing a retirement home. It is a comedy, (Elvis and J.F.K have ended up there) but could be seen to be about aging and growing old in a society which puts youthfulness first. Thomas LIGOTTI—modern writer of the weird tale, including his collection, The Shadow at the Bottom of the World so - from gothic to weird, the new weird and the miserablist writers. All influences for the genre writer.

6) Who do you go all fan-boy about when it comes to the horror genre? Have you 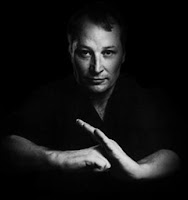 ever met anyone more famous than yourself and how did you react?

I’m crazy about Joe R. LANSDALE ’S fiction and I got to meet him at the World Horror Convention in Toronto in 2007. I was a little awe struck but managed to tell him that he influenced my writing. I love The Steam Man of the Prairie and The Big Blow especially – the latter set against the great Galveston storm of 1900. I sent my collection to him and he actually read the stories. He wrote back and said in his Texan way ‘Kid, I like all your stories. Your book is killer and a class act for a first collection. Allyson BIRD is a rare bird indeed. An original voice in a world of plain vanilla. She rides some dark waves with grace and a heart full of light and shadow. If there’s any justice, she’s on her way to true recognition.’ Cool.

7) If you had a chance to invite any horror legend, be it actor, writer, director, author (living / dead / undead) over for some tea, who would you choose and why?
Slightly cheating here. I’m going to say Orson WELLES. Why him you might well ask?

Well for his borderline horror in Macbeth, and the fact that his radio production of War of the Worlds definitely scared the living daylights out of some people. I’d have him for tea with H.G. WELLS. I heard them both interviewing each other on Youtube the other day.

8) Lights on or off when watching horror flicks?
Off.

10) What is the best advice you ever received from someone about horror writing?

Put your heart into it and don’t hold back. Be honest.

11) The horror genre has seen many incarnations over the past few years – what do you think the future holds for the genre?

Probably more apocalyptic fiction because of the recession and worries about the planet. Hopefully more introspective fiction too.

12) Do you have a zombie apocalypse survival plan – apart from going to hide in the Winchester, that is! – and will you be able to implement it?

Way too cold for the zombies up here on the moors and if they have any sense they will swap places and stay in the Winchester.

13) Are there any “how to” books on your bookshelf you would recommend to aspiring authors?

I have some but the best for me has been Fear in a handful of Dust by Gary BRAUNBECK.
Who wrote this? Liz at 1:20 pm

Congrats! You have something here.