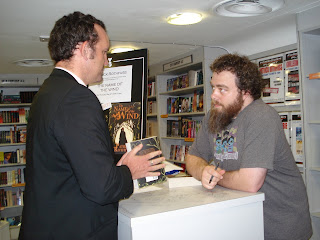 Mark speaking actual words at the legendary Patrick Rothfuss.
As I mentioned in the previous post we got to hang out with some cool people attending the Patrick Rothfuss signing on Thursday evening at Forbidden Planet. Not only was Simon, Jon and Gillian from Gollancz there basking in the afterglow of a well arranged signing, Danie Ware from FP shepherded everyone along and took photos.


Graeme from Graeme's Fantasy Book Reviews was there as well as Adam from Wertzone. We also met an amazing new friend, April from Norfolk. Well, to be honest, she had no choice - she got roped into random discussions about book covers, fan-girling, cats and dogs and of course, Patrick Rothfuss as we stood in the queue with Karen Mahoney - all of us waiting for a few moments of Pat's time.

Mark anguished about what to get Pat to write in our copy of Name of the Wind. Eventually he struck on an idea and once his turn came up, he explained to Pat that he (Mark) is currently penning a zombie tale and would like to know what Kvothe would say if he ever came into contact with one...and you know what, Pat spun that around and came up with an amazing line from his upcoming THIRD NOVEL NOT YET PUBLISHED. 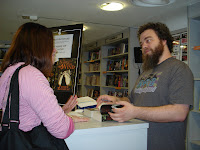 Kaz was up next and I didn't really get a chance to hear what Pat chatted to her about - but I did hear advice about writing and perseverance etc. I was too terrified about the story I wanted to tell him...


My turn came up, I grabbed Ana's copy of The Name of the Wind along with a copy of the review she had done. I introduced myself and explained to Pat that Ana was a huge fan of the book and of Pat (of course) and please could he respond in his own words to this comment from Ana which I had received via email on Thursday afternoon:


"I simply said in my review that it was the best book I read since the Book Smugglers' inception. gave it a 10 and wanted to have babies with it."


He did falter. He quirked an eyebrow and burst out laughing. Then he paused. And said: "No, I can't possibly write that because I could be arrested for writing that..." Then he wrote his reply to Ana and well, I'm not going to say what he wrote - she can blog that herself when she gets the book, hopefully tomorrow if Royal Mail plays along.

After chatting to Jon from Gollancz for a few minutes he said we should come along to the Patrick Rothfuss Talk and Reading afterwards, at The Phoenix. And as we are free wheelin' we agreed and dragged a lovely new friend, Zoe along. 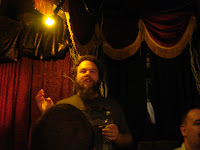 The evening went by in a blur of laughs and too much lime and lemonade. Patrick is a natural orator. Okay, that sounds rude, but it isn't. He appeared incredibly at ease chatting to a group of people who would quite easily rumble him for the contents of his backpack, especially when we realised he was carrying some pages of the second book with him...BUT we behaved ourselves and got do a fun, informal rambling Q&A session with him. He is a storyteller - every question he answered was a story. He is incredibly amusing and very down to earth - I mean, this guy is a god of epic proportions when it comes to writing and here he was, telling us about his writing techniques and what a weirdo he is. We lapped it up.


And when we didn't think it could get better, it did. He did a reading of one of his poems. Yes, you saw that correctly - a poem. Not just a skilled novelist but a gorram poetry writer too. We hates / loves him! The poem was light and incredibly funny and a little rude - like Patrick. Next he read us one of the pieces from the column he wrote when he was at Uni. Equally funny but incredibly erudite. Words are indeed his power. There was a small recess, a bit of a break to buy more booze and a chance to accost him with a handmade sign for Ana. 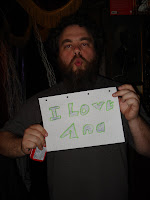 After the break it got even better - he read a few pages from his second upcoming novel and OMG - it is a hook and claw critter of goodness and I think we could quite happily have barred the Phoenix and made him read us all of it.


We left just after ten, filled up on encouragement, stories, too much lime and lemonade and feeling like we had a chance to spend an amazing evening with a new friend. It was very cool - one of the best events I've attended this year. Everyone had a blast and seemed genuinely reluctant to leave - but then you don't ever want to at the end of a really good evening.


Thanks to Danie and John at Forbidden Planet and to Jon, Gillian and Simon at Gollancz for arranging this. We loved it and we can't wait for Pat's next book - but you know, we understand perfection times time, so we'll not complain too much!
Who wrote this? Liz at 9:30 am

I can't believe you showed him my email.

I thought I was cheeky. I bow down tou now, OH Queen of Cheek.

Look at the amount of spelling mistakes. *headdesk*

Can I plea EXTREME excitement?

I am also green with envy, but I had to get home to my poor 'defenceless' boys... LOL.

Ana: Don't feel bad, if you'd gone you probably would've just collapsed at his feet or something, and dude... that would NOT have been cool. ;)

I'm am so incredibly jealous. You have no idea how very insanely jealous.

*wails* Why couldn't the Scottish bookstores host a signing?!!! Why?!??

It sounds as though you had a great time! We had a pretty good time in Taunton, too ( blog here if you're interested.....