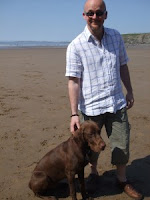 Mark and I are lucky enough to be able to be a small part in Tim Lebbon's blog tour - okay, maybe not so tiny - we are afterall the FIRST STOP on the leg of his whirlwind tour of other blogs and sites. Tim (pictured left) is celebrating the publication of Fallen in paperback AND the publication of his newest novel in hardback - The Island.
We have also been given the opportunity to offer a copy of Fallen to give away to a lucky entrant. We'll let the competition run a week only (entries in by Friday, 15th) purely because you just have to get your grubby paws on a copy to read as soon as possible!

And there is even more. We have been given some special content, exclusive to MFB, just for you to read. But that is not all I've got up my sleeve for you. further down is chance to win - from the Allison and Busby publishers' site - a copy of Tim's newest novel, The Island.
More of that a little bit later on, though. Here is our main act, Tim Lebbon, wordsmith and world conjuror, in his own words:

Sometimes it’s the world where your story is set. The geography, flora and fauna, and how that becomes a place you want to write about, a whole new world you want to explore ...

Sometimes it’s the idea. The heart of your novel, the sun around which the characters and events form, orbit, and occasionally collide ...

It can be the theme, an underlying concept that you want to explore to its fullest potential, and which can be most successfully analysed in this particular world, with these people, civilisations, and these mad monsters tearing the world apart ...

But with FALLEN, it was none of these. It was the characters. When Ramus Rheel and Nomi Hyden introduced themselves to me, I knew I had to write a novel about them. They were screaming to have their story told, and at the same moment they made themselves known to me, I also knew some stuff about their backgrounds, their relationship, and some of what must happen to them to set them on course for this book's finale. I could even picture them in my mind's eye ... quite a spooky feeling considering their names had yet to appear on paper. But who ever said writers are normal, right?

There's always a definite moment when a book feels whole to me. It's the instant when a book changes from a two-dimensional idea on a piece of paper, to a three dimensional, complete world, where the characters I'm creating and the landscape they inhabit come alive and are suddenly real. Sometimes it'll happen when I'm brainstorming an idea on paper—making notes, sketching scenes, trying to expand on themes. Sometimes it's not until the actual writing process begins, either when I create that all-important opening scene (or even opening line), or when I'm feeling my way through the first chapter. Usually if the feeling hasn't hit by then, I'll leave the story alone for a while, take a step back and hope that a new approach will bring it to life. Sometimes I push on, and the story might grow and grow until it reaches that state of 'wholeness' that is so important ... or it might fade away with a whimper.
With FALLEN, the instant these two characters came along my mind caught fire. They're explorers, dedicating their lives to discovering the unknown landscapes of Noreela in its early years. They work for the Guild of Voyagers, though perhaps in the Guild's eyes they're not the most successful ... that plaudit often goes to Voyagers who have gone so far that they're lost in the land, never to be seen again. They're lifelong friends, attracted to each others' weaknesses as well as their strengths, and theirs is a relationship built on the wonders they have seen, and which can survive petty squabbles. They're also competitors ... because Voyaging is a lonely calling with sometimes selfish aims. And perhaps they might even be lovers ... or if they're not, it's something they've danced around, and which perhaps they both think of but avoid. Their friendship is precious, and perhaps this is the one thing it could not survive.

But it was still not quiet there. It itched at the edges, this story just waiting to be born, but there was one little thing missing, and I didn't know what. I knew that theirs would be a momentous quest, perhaps even the last great Voyage in Noreela's Age of Expansion ... but that wasn't it. There would be dangers and challenges, of course. But there was still something absent, and it had to be to do with Nomi and Ramus, not the world around them.

It took a walk in my local woods to realise what that was. It's beautiful in there, and I imagined finding it for the first time, being the very first person to see those trees, that stream, those bluebells. And I had it. These Voyagers covet the wonders they seek, and so at some point on their journey they must become mortal enemies.

That was it. FALLEN was a complete, rounded story, a tale with soul and meaning, emotionally challenging and fantastic in scope.

All I had to do now was write it.
Did that peak your interest? Whet your appetite for more? Allison and Busby, Tim's publisher sent us an exclusive excerpt of Fallen for you to read. This is the link to that extract.

And now, for a chance to win a zigned copy of The Island - it is a standalone novel set in the same world as Fallen - follow this link and it will take you to the A&B website where you need to enter this word - RAMUS - in order to enter. There is a different code for each blog stop, so up your chances of winning by collecting the different codes as you follow Tim’s tour. You can then enter more than once, as long as you don’t repeat the same code.
As I mentioned earlier, this is only the first stop of Tim's blog tour. Next up he'll be over at A&B's blog. Pop by to catch him on the 13th, doing a reading from Fallen. Check out Tim's blog for a full list of stops on his blog tour.

Thanks to both Tim and the publicity girls at Allison and Busby for this fantastic opportunity and for making MFB the first stop in the blog tour!
Who wrote this? Liz at 8:23 am

Delightful to read. Thank you

Great, compelling story. Mr. Lebbon has a gift for making characters you really feel engaged with and I think "Fallen" is his strongest Noreela work yet. However, until seeing the above picture I had no idea he was covered in brown fur.
Jeff P.