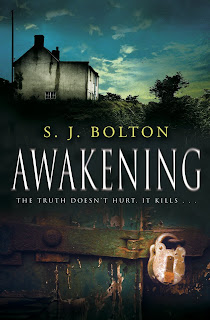 Synopsis:
An idyllic village is thrown into turmoil in a startling, heart-racing thriller.
Veterinary surgeon Clara Benning is young and intelligent, but practically a recluse. Disfigured by a childhood accident, she lives alone and shies away from human contact wherever possible. But when a man dies, following a supposed snake bite, Clara learns that the victim’s post mortem shows a higher concentration of venom than could ever be found in a single snake.
Assisted by her softly spoken neighbour and an eccentric reptile expert, Clara unravels sinister links to a barbaric ancient ritual, an abandoned house and a fifty year old tragedy that left the survivors fiercely secretive. Then the village’s inventive attacker strikes again, and Clara’s own solitary existence is brutally invaded. For someone the truth must remain buried in the past...even if they have to kill to keep it there.

How did it all begin? Well, I suppose it would be the day I rescued a newborn baby from a poisonous snake, heard the news of my mother’s death and encountered my first ghost. Thinking about it, I could even pinpoint the time. A few minutes before six on a Friday morning and my quiet, orderly life went into meltdown.
For someone who loves reading the opening page of a book, reading this small paragraph from Awakening, the second novel by the 2008 debut author SJ Bolton, is a pure treat. And it just keeps getting better with the crisis escalating higher and higher.
Our heroine, Clara Benning, is a brilliantly created main character. She has a great affinity for animals and much prefer their company to those of humans. Having moved to a small village she keeps to herself and minds her own business. Needless to say everyone in the village is intrigued by Clara, who she is and how she came to carry an ugly scar on her face.

When she is called in to help a panicked mother rescue her infant from a snake in it's crib, her life takes on a different dimension altogether. Snakes are being found all over the village, in people's homes and everyone is panicking. The majority of the snakes are harmless British snakes and it is illegal for them to be caught and killed. But not all of the snakes are harmless and Clara very soon has her hands full with a deadly taipan snake, its origins in the very far Papua New Guinea. No one knows where these snakes are coming from and there is a panic as an elderly man dies from a snakebite, whilst gardening. There is the mystery of the ghost which more than one villager has seen - the ghost of an elderly gentleman who had died the year before. Or had he? What happened back in 1958 and how did it involve the village being overrun by snakes?
Tautly written, Awakening is a gripping thriller with more than enough creep-factor. It is also a story about Clara finding herself and her confidence to confront her own fears by standing up for the truth - even it means that there is an arrest warrant out for her!
I saw a reviewer in The Bookseller say: "she just writes so well..." and it is true. SJ Bolton is a very gifted writer and although I loved her first novel, Sacrifice, I did not expect the same level of excellence in Awakening and I am truly happy to say that Awakening is even better than Sacrifice. Clara's characterisation is handled deftly - almost everything is seen from her point of view as the novel is written from first person perspective. In some other books I have read, this can become tedious very quickly but we are saved from any kind of boredom by an involved plotline and an unusual heroine who doesn't go so much with the flow as run flatout against it. She is contrary, a bit surly whilst being engaging at the same time - it is a very fine line which SJ Bolton treads here, creating a difficult heroine who could veer so very easily into someone unlikeable.
There are several strands in the novel which are tied up in a series of reveals and the success of these alone should indicate that the author has done a very good job. There is a very faint strand of romance and personally, I enjoyed the two male characters in the novel which Clara comes into contact with. I would have loved to have seen more of them in more scenes, but then this is Clara's story about her journey to discover the truth about the village, whilst it forms a backdrop to her own "Awakening".
Awakening is a fascinating read and will be going onto our "Summer Reads List" which we will be compiling from the end of May onwards during Summer. Awakening is published by Bantam here in the UK and is now available in all bookstores and online. SJ Bolton's site can be found here, along with the extract of the first chapter.
Who wrote this? Liz at 12:47 pm