Through a glass, darkly by Bill Hussey 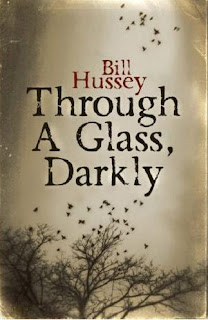 When a young man goes missing from the Fen village of Crow Haven, Inspector Jack Trent is sent to investigate. He finds an isolated, insular community which harbours a shocking secret. A secret he has already glimpsed in his dreams. Now, in a race against time, Jack must piece together the mystery surrounding Dr Elijah Mendicant and the ancient Darkness of Crow Haven. He must save the life of an innocent child and stop an ageless evil from rising once more.

You can tell when an author writes out of love for his genre. This is very much the case with Through a glass, darkly by debut author, Bill Hussey.

The first three sentences of the novel go like this:

Jack Trent stared into the bathroom mirror.
He could not fight it. The dreaming reached out and pulled him through the glass.

I was hooked, as Mark would say, using his newly acquired fishing analogies. We immediately fall into a crisis with the main character, Jack Trent and it’s an unusual one. He sees things and experiences things others cannot and would not want to see. Not so unusual, you would think, with the deluge of shows on TV currently dealing with people who have the sixth sense. But this novel is so much more. It is freakishly scary and written with tremendous skill and it sweeps you from your feet and carries you along until its dark conclusion.

Jack Trent is a lonely, haunted main character and therein lies his strengths: he has to stand up against monsters some people might just be able to sense but have no power against. And because of his past experiences and his continued visions and experiences, he races towards the climax of the book in an all out ride of terror, even if it means that it might be the last thing he does.

The settings of the Fells is beautifully utilised and it gives the novel a true sense of weird and desolation. The town of Crow Haven is rendered in stark contrasts and you almost feel sorry for the people who have to live in this isolated community but then you realise that they had been mute accomplices to some awful things during the centuries and you really do just want to wash your hands off them.

Another character which I enjoyed reading about is Father Brody. He stood against the evil in Crow Haven in the past and has come to know that someone else would come to put a stop to it. He realises that this person is Jack Trent and he manages to escape his confinement in a home for retired priests to try and help Jack in his own very odd and dark way, that reflects his own experiences at Crow Haven.

The whole story is a giant puzzle which Jack and his almost-girlfriend Dawn, a fellow police officer put together with meticulous care. The underlying skill of the author comes through in how well the novel is plotted. You are “on scene” for the big happenings, nothing happens that you don’t know about so you don’t feel left out or cheated.

The story narrates on a scale that reminds me of the classics from the gothic noire books published by Stoker, Shelley and Lafcadio Hearn– it is dark, mesmerising and deeply tragic and poignant because of the main character’s self-doubt and continuous searching of himself in a time of desperate need.

I am a fan of good horror novels (and awful horror movies) and have to freely admit that if Bill Hussey is the new voice of the genre, especially UK horror, then we are all in for a tremendous treat because if he starts us off with a bang like Through a Glass Darkly…we can expect major things from him.

It stands alongside House of Lost Souls by FG Cottam as one of the best horror books I have read this year.

Bill Hussey has a Masters Degree in Writing from Sheffield Hallam University. His first novel, Through A Glass, Darkly was inspired by the lonely Fen villages of Lincolnshire and by a lifetime devoted to the horror story. Bill lives in Skegness and writes stories about things that go bump in the night. The book is published by an Bloody Books.

And yeah, I can see how some of those Lincolnshire villages could insire a horror story. ;)

I really liked the novel too. And Bill is a very nice guy :)
I can't wait to see more works of his.

I'm looking forward to reading this one :) It sounds rather excellent!

If I can recommend one book: The Shadow of the Wind :D I think you'll like it!