Guest Review by Skarrah - Jackie Kessler's "The Road to Hell" 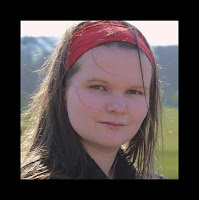 The amazing Lex (pic left) aka Skarrah (her LJ site here) paid MFB a huge compliment by asking if she could guest review for us. Naturally I jumped at the chance - who wouldn't! - and here is her first review for us on Jackie Kessler's second outing in her Hell's Belles range of books, The Road to Hell.
The synopsis:
The synopsis:In Jackie Kessler's debut novel Hell's Belles she introduced readers to Jesse Harris, a succubus-turned-human with a tart tongue, a way with a g-string, and a soft spot for sexy undercover cop Paul Hamilton. Now Jesse's back, and where she goes, Hell is sure to follow…
Jesse may no longer be a soul-stealing succubus, but she's got a Hell of a past. She'd love to come clean to her sweet, super-hot boyfriend Paul, but how exactly does a girl start that conversation? There's no name tag that reads: "I Used to Have Sex with Men before Taking Their Souls to the Lake of Fire - Ask Me How!" Just like some people are worth being monogamous for (shudder), some secrets are worth keeping. Like the fact that bad boy incubus Daunuan keeps popping up from the Underworld to put some toe-curling moves on her; that her former associates are trying to strong-arm her back into the fold; and that every supernatural entity on the planet seems to want to have a conversation with her in the bathroom. But someone in the Underworld isn't ready to play nice (go figure), and this time, the stakes are nothing less than Paul's immortal soul.
If Hell wants Jesse back so badly, they've got her. But payback's a bitch, and this bitch is about to rock Hell like a hurricane - or lose her soul trying… 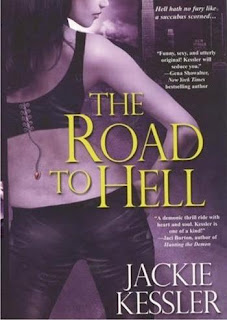 In The Road to Hell, just like Hell's Belles, Jesse's voice is easy to read and even easier to immerse yourself in. We're pushed off the top of a slippery slope from page one once again and I for one enjoyed the ride down. Things start out on a normal night in Spice's Champagne Room that soon sours into a reminder that Hell just isn't what it used to be. With The Pit's denizens cornering her left, right and in the Ladies room, Jesse isn't likely to shake off the reminder anytime soon. Nor the memories of the betrayal by her best friend, the Erinyes Megaera.

I love following Jesse's struggle with being a human with a soul and all that comes with it. Through the book we get to watch her grow and accept all those things we take as a given; love, jealousy, grief. Not to mention temptation from long time aquaintance the incubus Duanuan. We watch her overcome all this as she dives head first back into Hell to save what she has learned to be the most important things a human can have - friendship and love.
Kessler manages to weave these subtle threads of what it means to be human amidst razor sharp dialogue, kick-ass action and toe-curling, fan yourself, sex scenes.
I can hardly wait for the next in the series. The delectable incubus Daunuan's story Hotter Than Hell is released August 2008.
Jackie's Hell on Earth series is a must read.
Who wrote this? Liz at 10:31 pm

Congratulations on a wonderful first guest review over here, Lex!!

Thanks so much for the review!