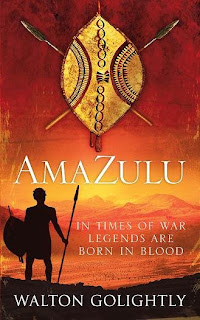 I was really pleased to receive AmaZulu by Walton Golightly in the post from the amazing girls at Quercus a little while ago. I read the book, loved it and reviewed it (here) and asked Liz how I go about interviewing Walton. We put a request together and through the girls at Quercus we got hold of Walton and discovered that he was more than happy to answer questions for us. I set about putting my first batch of author interview questions together and Walton was kind enough to answer them. Please see the interview below.

Born in 1966, Walton Golightly is a freelance writer from Durban, KwaZulu-Natal (South Africa)- on the doorstep of what used to be the Zulu Kingdom. He's a film buff with a passion for Spaghetti Westerns, '70s action movies and the films of Jean Luc Goddard. AmaZulu is his first novel. He shares his life with a few thousand books and two dogs. Occasionally the dogs let him sleep on the bed.


I understand that you’re a nine-to-fiver like most of us. How did you find the time to do your research and the writing? What’s your average day like?

Writing has always come first in my life. It’s never been a case of “making time” – it’s always been about finding more time. I’ve never had much patience with those who say that they want to write, that one day they’ll sit down and write that novel they know is inside them. Gimme a break. You’re either writing or you’re not.

As for the research, that slotted into my normal reading.

Zulu the first book you’ve had published –how does it feel to see your work on a bookshelf?

Stunned. Still find myself looking at a copy and thinking “Hey! It looks just like a real book!”

What was your reaction when you got the call/email telling you it was being published?

Disbelief. Terror. Received an email telling me to expect a phone call the “next day.” So things were still up in the air. I mean, they could’ve been phoning to tell me “nice one, please try again.” Which is a rejection however you look at it. Still, despite everything, it didn’t escape me that, not for the first time in my life, there I was anxiously waiting for one, specific woman to call me. Although, unlike most of those other times, this was definitely worth the wait! And the pacing.

How do you plan your work- do you plan each chapter in advance, or do you let the story evolve as you write?

Too much planning and I lose interest. Feel as if I’ve written the bloody thing already. But I need to have the plot clear in my mind (and that includes the characters). That is I need to know where I’m headed. And I have several unfinished pieces, some 50 000 or so words long, where I’ve, er, literally lost the plot.

Is there a single event that inspired Zulu? How did the idea come about?

No single event. It’s just that these are the stories you grow up with out here.

As for the spark… For a short while I toyed with rewriting King Solomon’s Mines from Umbopa’s perspective. But all that would’ve boiled down to was a critique of colonialism and “white writing” – talk about flogging a dead horse. Plus it meant re-reading Haggard, an ordeal I just couldn’t face. Better to leave Allan Quartermain with Alan Moore, eh?

At any rate, one thing led to another and we have Amazulu.

Did you struggle to write from any of the characters points of view?

Not really. The most daunting was Shaka, and when I was happy with the way I was portraying him that’s when I knew the concept would work.

Shaka’s training regime for his army has been likened to that of the Spartans. What do you make of the comparison?

It’s fair enough. What’s more interesting to me, though, is the fact that shortly after Shaka’s death he was being called the “Black Napoleon.” Since he was being called such by English it was clearly not meant as a compliment. But the comparison is more apt than they probably realized. Both rulers had a lasting impact on their “tribe,” one that’s felt to this day, yet both were also capable of atrocities and nearly destroyed their respective “countries.”

Even more interesting, Napoleon went around saying things like “I spend 30 000 men a month,” yet Shaka’s seen as the “savage.” 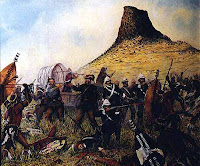 If you had a chance to ask Shaka one question, what would it be?

Nothing. There’s the Shaka of Amazulu and the Shaka of history – and let’s not let the facts stand in the way of a good story. Besides, facts rarely give you the truth. And in the sequel I intend to explore the controversial theory that Shaka had no brothers and sisters, was born of a virgin and was indeed the Son of God.

The book will be called Dhlamini’s Code.

Then again maybe not.

Amazulu is the first of a trilogy. What do we have to look forward to in the next two instalments?

Firstly, from early on this was always going to be a trilogy. Basically, Book I follows Shaka’s rise to power and ends with his descent into madness. At another level it plays with the legend, seeking to reinterpret the key events and present a more realistic Shaka. And a more realistic look at the Zulus at this time. One which ought to challenge a few misconceptions.

Er. And despite all of this, Shaka isn’t the main character.

Book II will show how Shaka consolidates his power and deals with the coming of the whites. Which, incidentally, means more humour, with history writing the script, as these weren’t the smartest, most industrious exemplars of Empire (then again, neither were they the cruelest or most vicious).

At that other level, meanwhile, we begin to challenge or – dare I say it – deconstruct the legend, presenting other ways of seeing.

And despite all of this, Shaka still isn’t the main character.

As for the third installment, I myself will be quite interested to see what that’s going to be about.

What has the reaction been like in South Africa, particularly in Kwazulu-Natal?

Reviews – and sales – have been gratifying, thanks in large part to the hard work done by Kwela, my SA publishers. As for KZN in particular… I could mention the halfwit on a local Web site who feels it’s acceptable to review a book without having read it, but I won’t.

What do you read in your time off?


Amazulu is available to purchase on Amazon, Waterstones.com, Play.com, WHSmith and from Quercus directly, as well as all other good bookstores.