The Curse of the Necrarch, Steven Savile 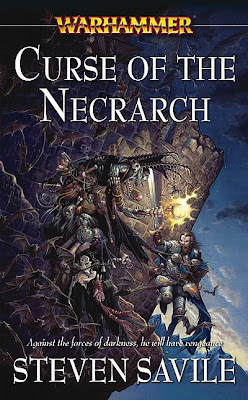 “The smell of old death was heavy in the air.”

So begins the Curse of the Necrarch, a tale from the long established and bloodsoaked world of Warhammer fantasy, courtesy of The Black Library.

Curse is a bit of a rarity; the story unfolds from the perspective of both the vampires and the human warriors as their paths collide and events are set in motion, leading inexorably towards the cataclysmic final confrontation.

I like the fact that you can appreciate where the vampires are coming from; they’re not simply done by the numbers. There’s no question that they’re evil, or bordering on clinically insane, but there’s enough there to identify with, and this is what will make Curse that much more appealing to gamers out there who play Undead armies. There’s nothing worse than reading a book told solely from the perspective of the square jawed hero who’s knocking seven shades of hell out of the guys you’re rooting for.

Steven hasn’t let Curse fall into this trap; the Necrarch is a cunning, proactive protagonist who gives as good as he gets. The action scenes are crisp and convincing, and blend into the story seamlessly; it doesn’t feel like they’ve been added as an afterthought simply because someone thought the story needed a jolt. It moves along at a good pace, and presents a suitably grim atmosphere for the end game being played out on its pages.

This is the first I’ve read of Stevens work and having had a taste, I’m planning on picking up a copy of his earlier ‘The Von Carstein Trilogy’ as soon as I get a chance.
Who wrote this? Mark at 10:54 pm