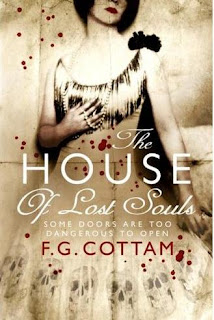 I was utterly charmed by this lovely looking book from Hodder.


Little did I suspect the cover hid one of the scariest books I had ever read. I briefly spoke to one of the girls at Hodder shortly after I started reading it and she sagely warned: "Don't read it at night."
House of Lost Souls is the kind of book that stays with you purely because it has all the elements of amazing storytelling: an intricate involved plot, damaged dark characters struggling to do the right thing, swathes of paranormal incidents handled with an adept skill that makes it a pure pleasure to read. Even if I read it with all the rights on!

Synopsis
The Fischer House was the scene of a vicious crime in the 1920s - a crime which still resonates as the century turns. At its heart was a beautiful, enigmatic woman called Pandora Gibson-Hoare, a photographer of genius whose only legacy is a handful of photographs and the clues to a mystery. Paul Seaton was lured to the house ten years ago and escaped, a damaged man. Now three students will die unless he dares to go back. But this time he has Nick Mason at his side, and maybe Mason`s military skills and visceral courage will be enough.
We pick up the story at a funeral as Nick Mason is making use of his camouflage skills to spy on his sister attending the sad occasion with her friends. The same friends who had gone with her to Fischer House as part of their University studies and who had come back so severely damaged by what they experienced, there were incidents of attempted suicide, with one of the girls succeeding, hence the funeral. It really is a very powerful scene, as it is familiar, sad and has enough strangeness to it, to set the tone for the rest of the book.
We also meet Paul Seaton a bit later on - he had survived a visit to Fischer House many years ago. He had not come away unscathed from the encounter and is doing his best to get on with his life. He is asked by a friend to help these girls as something seems to be stalking them. He is initially hesitant, until he goes to meet Nick and sees his sister in the grip of something that is not of this world. Paul and Nick join forces and decide to try and put whatever lurks in Fischer House to rest.
The book makes full use of intricate backstories, a mystery surrounding a famous photographer from the 20's, appearances by people from the era such as Alistair Crowley and Goring which add to the menace of the storyline, sat beside beautiful writing revelling in the use of sensory description. The fact that this reads like a literary novel rather than something a lot darker is where the pure shock value of the story lies. It delves deep into the unpleasantness of human sacrifice, magic and the summoning of grim entities that stalk through the Fischer House. I don't think it has been packaged as horror. And to be honest, I've not ever read a horror novel quite like this - it is lyrical and insidious and deliciously dark. The characters are compelling and I particularly found the photographer's diary entries to be incredibly touching.
The author worked hard threading the vein or darkness through the novel and it works because all your senses are engaged. It is an enjoyable book, not to be read in the dark (!) and written with great skill by a very talented author.
Hodder sent me two copies of House of Souls - yay! - so there is a freebie up for grabs. I'll let the comp run till next week, so do email me with your name and postal address - again, I'm happy to post Internationally. Please make sure that you put House of Souls in the subject line. I will do a random selection and announce the winner next week Friday, 24th July.
Who wrote this? Liz at 9:49 pm

I'll grab a copy from Amaon :)
Don't add me to the freebie list - you send me enough as it is!

Thanks for the two you sent - I plugged you on whenthedogsbite.blogspot.com

I just wanted to say that the cover really is beautiful.

It really sounds like an interesting book! And what a beautiful cover!

Finally got here! Just as I expected, a fantastic Blog. I love the reviews and the whole thing you have here, I will be back!

This particular book sounds really interesting, but also like one of those books that draws you in and you are really not sure if you want to go but you still go anyway. Just up my street!

It does sound like a really good book :) I'm not going to enter, because I think that would be slightly unfair, and I still haven't reviewed Odd and the Frost Giants yet! :D Hope you're well. I've been absent a bit, but hopefully not for too much longer.

Im seeing all these comments about wanting to read it, but no one came back and said they read it after! Its amazing. Sitting by myself at 3 am reading this made me actually feel unnerved. Its wonderfully written and if you like scary books, I would absolutley recommend it.

I just finished it, and I loved it. Scary, yes, but not so scary that you will be looking over your shoulder when you are finished. Great character development, and very visually descriptive.