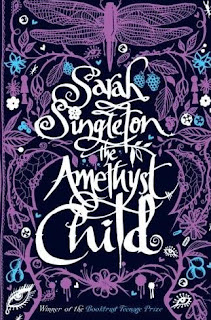 AMBER LACKS FLAIR AND ORIGINALITY OF THOUGHT TO BE AN OUTSTANDING STUDENT OF ENGLISH.
Big ugly words scrawled in a journal highlights so much of the pain of main character in The Amethyst Child by well established and favourite Sarah Singleton.
In The Amethyst Child, we meet Amber - a fourteen year old teenager, highly creative, fond of daydreams, preferring her own company to those of people she just doesn't "get". She's maybe a bit goth on the inside, but not on the outside. She seems to live past her very down to earth and real parents who believe in goodness and light. Her dad loves Dire Straits, her mom is strong and steady and looks after everyone when she's not working in a jewellery store. They live in a newly built area and it is easy to imagine the town, the school, Amber's disillusion with her family and her own life and her helplessness. She finds solace by reading and writing but it's Summer holidays and Amber is bored.
Then she meets Dowdie who lives on a commune close by called the Community and her life takes a dramatic change. Dowdie is wild and searingly bright when compared to Amber's muted tones. She experiences Dowdie in technicolour and sees herself as monochrome. But somehow, they fit. Together they make a whole. They become steadfast friends, spending lots of time together. They visit the Community and Amber becomes smitten with the seemingly carefree lifestyle of those who belong to the Community. Then she meets James, the person who runs the Community and initially all goes well. Amber is told about the Amethyst Children, the children who will lead the world in the future. The Amethyst Children are people who are creative, instinctive, they do not get along well with others and they have inherent powers and skills so much needed when the time comes. And the time will be here shortly because society will fail and the need for the Amethyst Children will be dire. And both Amber and Dowdie are two of these Amethyst Children who needs special care and attention because on their shoulders rests tomorrow.
I loved Sarah Singleton's prose. We have a fantastic narrator in Amber. We experience her seemingly dull and ordinary life and sense her talent and her fears for the future for herself, her parents and the world in general. She is highly intuitive and such an easy target for Dowdie and James as she desperately craves - like we all do - that extra bit of attention, to be told she is special and needed. As she gets more closely dragged into the web of the Community and becomes closer to James and Dowdie, my heart ached for her. The story spins along beautifully with parts told in the present, then the past, as Amber tells the Police about this mysterious event to which she was witness to and it isn't until quite far into the book that you start to comprehend the exact magnitude of what it could be that had happened.
As a counter-foil to James and Dowdie's fiery beliefs, we have the fantastically sober and beautifully rendered Johnny who styles himself as a "emo fag". Tremendously talented, he would love to be a photographer but has his own issues with his parents, the system, school, the games people play. He is the sane voice, the voice that tries talking sense into Amber, to make her see sense. But things are very shaky.
I don't know how the author managed to hit that exact spot which I so distinctly remember as a teen when life felt both so hopeless and impossibly grand at the same time. She writes with poetic skill and such understanding that the characters never veer off into BBC stock teenagers. The book is genuinely unputdownable. The characterisations are brilliant and there is a lot of thoughtful conversation and insights from both Johnny and Amber about life, family and friends. It is a very grown up book and it makes no apologies for using very mature concepts and ideas and relaying them through these teens. Personally I think this is not just something that should be read by teens but by adults of all ages.
What is important is that the book and Amber comes a full circle. It started with Amber sitting on a bridge over the river, staring at its waters, as someone not part of the world, but observing it. We leave Amber taking the plunge into the water, having pocketed her fears, experiencing life.
The Amethyst Child is not really a book that you read as much as experience. It is an absolutely gripping book which I would highly recommend reading for Sarah Singleton's deft touch with the poetic pen, vibrant characterisation and for her pure unadulterated storytelling skill.
Who wrote this? Liz at 7:47 pm

I read this book (being a teenager) and interpreted in much the same way you did. I think every teenager can relate to Amber, at this age you feel repressed searching for your true self, and if someone can help you to (much like Dowdie and James) that person can be your world.
Every teenager yearns to be special, and this is a girl learning that she is, in some ways, its who every teenager secretly yearns to be.