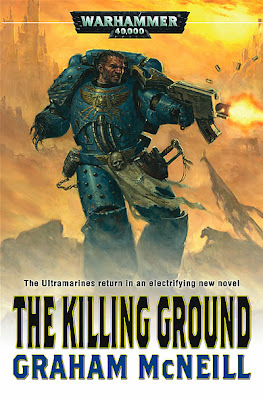 I love the Warhammer 40,000 universe. I love the rich history that stands behind it, the depth of the all-pervading darkness that pervades every corner of humanity, the sheer morbidity of it all.

Most of all, I love the Space Marines, the genetically modified super-soldiers of The Emperor, who watches over humanity from his Golden Throne upon sacred Terra. The Marines are, by all accounts, larger than life, the embodiment of the warrior ideal, bound by their allegiance to their Chapter and thereby The Emperor.

The Killing Ground plunges us into this universe, to the planet of Salinas, a planet torn by civil strife in the wake of a brutal suppression of alleged treason and where the voices of those souls lost in a terrible slaughter are about to be heard.

Uriel Ventris and Pasanius, warriors of the Ultramarines chapter are thrown into this simmering powder keg by a twist of fate, having narrowly escaped a hellish Chaos ridden world whilst fulfilling their Death Oath (see The Ultramarines Omnibus). All they want to do is return to their homeworld, to be reunited with their battle-brothers and return to duty.

But that’s far too much of a happy ending for this universe. Mix in some mutants, a bloody handed tyrant, civil rebellion, a psychic tornado and a reality tearing final battle and you’re on your way to a cracking slice of fun, 40K style.

Graham is a man so fully immersed in the mythos of the 40K universe I’d be surprised if he doesn’t refer to his car as a Land Speeder. He handles the shock and ferocity of the battles that rage throughout the book with deft confidence, and still manages to bring Ventris and Pasanius to life as both men and Marines with sickening ease in between the explosions and screams of the dying. What is equally satisfying is how the supporting cast stand out as more than handy plot devices masquerading as people or cannon fodder- they have their own lives and stories that you can relate to and understand. Even the 'monsters'.

I really enjoyed this book, bearing in mind that I read it as a standalone story, not having had the pleasure of devouring The Ultramarines Omnibus yet, which is a testament to his ability to craft a world you can lose yourself in without further ado.

You can read a sample extract here.
Who wrote this? Mark at 9:56 pm