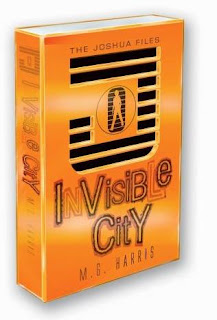 I first spotted this very attractive book in my local Waterstones and was incredibly chuffed when Scholastic decided to post a copy onto me to review.
The Joshua Files by MG Harris really does live up to the hype. It masquerades as a YA novel but trust me when I say this: it carries a tremendous punch and it is up there with other quest novels (Steve Berry, Scott Mariani and others of their ilk) aimed at adults.
Brief synopsis from the official Joshua Files site:
Joshua’s life was pretty cool – until his father was reported dead in an air crash in Mexico.
Was it simply a tragic accident?Why was the plane miles off course?Were there really UFOs in the sky at the time of the crash?
In the depths of the Mexican jungle, with a deadly international hit man in his trail, Josh must find the truth about an incredible, dangerous secret – and try to stay alive.

What makes this book such a clincher is that it is firmly rooted in the present, with its roots stretching back into the past. Like my history teacher used to say: how can you know where you're going if you don't know where you've come from?

We follow Joshua on a discovery of himself and his family in a bid to survive against the odds and against people who are keen to get their hands on the research his father had done and what he had found himself.

Joshua teams up with two friends and travels to South America to sort through his suspicions once and for all. He comes up against a stark reality and has to run for his life and survive in a place where he has no friends. And it has to be said, he recovers well in the face of adversity and proves that he is tougher than what his adversaries expected.

This book is ideal for both male and female readers, teen or adult. It has everything thrown into the mix - a lost manuscript, exciting foreign locales, a pretty girl, a steady friend, the need to save yourself and the world, UFO's, history, conspiracy theories - in other words: riveting stuff!

It is a quest novel at the heart - a high octane mix of adventure and thrills and a rollercoaster ride through history chaperoned by a young hero who is having much fun as the reader.

I do however, naturally, have one gripe: why (?!) were none of the boys this cool when I was growing up?