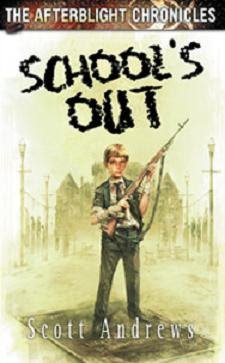 "It's never easy being fifteen, but when your teachers are killing each other, the prefect who loves to bully you is experimenting with crucifixion, and the rival gang from across town have decided that ritualistic cannibalism is the way to go, spots and BO don't seem like such big problems after all.

These are the final days of St Marks School For Boys, and the punishment for disobedience is death!"


School’s Out is part of Abaddon’s ‘The Afterblight Chronicles’, a series set in the aftermath of an apocalyptic plague that has wiped out everyone without a specific blood group.

School’s Out is told from the perspective of Lee Keegan, a teenage schoolboy who’s thrown into the chaos and uncertainty of this dark and dangerous new world.

Abaddon has certainly lived up to their tagline of Extreme Action! Aggressive excitement! Excessive adventure! There’s an abundance of action from the start as Lee is forced to fight to survive, to kill or be killed. He’s no Rambo though; I really felt for what he was going through, as he tries to hold on to the basic tenets of decency while the world curdles around him and he’s forced to face up to the new reality and make some hard choices.

School’s Out was out and out fun to read. It does what it says on the box, delivering a chunky dose of action, adventure and violence, and I was pleasantly surprised to find that there was a really likeable character and solid premise under all the blood and fury. If the rest of the series is as good we’re in for a treat!
Who wrote this? Mark at 7:35 pm