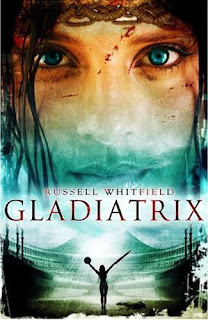 This book was bought for me as a bribe by one of the colleagues that I worked with - I had to help out on an urgent report. And I have to say I am glad I was bribed!
What an absolutely rollickingly good read.
I am a massive fan of historical adventure stories in the ilk of Bernard Cornwell, Simon Scarrow, Louis L'Amour, Conn Iggulden and Tim Severin. And from now on, that litany of names will have a new name added to it: Russell Whitfield.
Synopsis
Sole survivor of a shipwreck off the coast of Asia Minor, Lysandra finds herself the property of Lucius Balbus, owner of the foremost Ludus for female gladiators in the Eastern Empire.
Lysandra, a member of an ancient Spartan sect of warrior priestesses, refuses to accept her new status as a slave. Forced to fight for survival, her deadly combat skills win the adoration of the crowds, the respect of her Lanista, Balbus, and the admiration of Sextus Julius Frontinus, the provincial governor.
But Lysandra’s Spartan pride also earns her powerful enemies: the Dacian warrior, Sorina, Gladiatrix Prima and leader of the Barbarian faction, and the sadistic Numidian trainer Nastasen.
When plans are laid for the ultimate combat spectacle to honour the visit of the new Consul, Lysandra must face her greatest and deadliest trial.
Lysandra's character is so well portrayed - she is haughty, self-assured, arrogant and works really well in this setting. Being a Spartan is so much more to her than being able to endure a life of hardship. It is getting to grips with whatever life throws at you and getting on with it, and being a success at it.
I really enjoyed reading it and there are some instances where Lysandra is the most arrogant pigheaded person and you literally want to throw the book aside but then, undersanding where she comes from, along with the barbaric nature of the times, you can appreciate her actions. And you read on because it is such an awesome storyline.
The book is a bit shaky, at first, to be honest. But then the author finds his feet and you are carried along at a tremendous pace. There are a lot of very grand sweeping scenes, the very first battle scene for instance, and this is used to ground the reader and show them exactly what this story is about. It is then that the author's writing skills comes to the fore. He's established his main character and works in the other secondary characters and plots.
The settings are all chosen to display these characters to their best, even when they are the baddies, and I seriously found myself exhausted after some of the scenes. It is a good writer that can put you in the middle of a battle or fight and then, at the end, leave you gasping and thinking - wish that could be seen in real life.
I would highly recommend this book if you like adventure stories, historical novels in the ilk of the names mentioned above and if you were a fan of Gladiator, Troy, Alexander (the gods save us) and 300.
I've heard that Gladiatrix II is on the way - so do keep an eye out for that!
Who wrote this? Liz at 10:14 am