Season of the Witch, Natasha Mostert 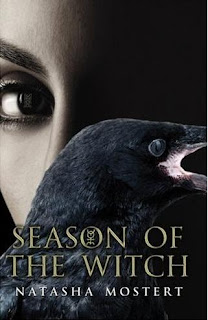 Gabriel Blackstone has an unusual talent. A computer hacker by trade, he is also able to enter the minds of others. But he uses his gift only reluctantly - until he is contacted by an ex-lover who begs him to find her step-son, last seen months earlier in the company of two sisters. And so Gabriel visits Monk House, a place where time seems to stand still, and where the rooms are dominated by the coded symbol of a cross and circle. As winter closes in, Gabriel becomes increasingly bewitched by the house, and by its owners, the beautiful and mysterious Monk sisters. But even as he falls in love, he knows that one of them is a deadly killer. But which one? And what is the secret they are so determined to protect?

Season of the Witch is an adept piece of chilling storytelling that competently mixes subjects such as remote viewing, magic, alchemy, parapsychology and the quest for ancient knowledge into a heady concoction of expert storytelling.

I enjoyed Season of the Witch because of pure and intelligent storytelling and the creation of its two intriguing female characters, the sisters Monk with the fantastical names of Minnaloushe and Morrighan.

Gabriel is asked by an ex-flame of his to please try and find her stepson who had gone missing. He was known to have been involved with the two exotic older women. Gabriel is at first not particularly keen to help but as the story develops we learn that he is probably the best person to do so as he has a strange set of skills.

In his youth he had trained as a remote viewer. Something I had heard of before (who hasn't watching X Files!) but have not really encountered it before in a book. I found the various concepts hugely fascinating and sat back to enjoy all the threads coming together as the story developed.
Gabriel’s current job was not entirely legitimate and he works freelance as an electronics information hacker – both these skills help him infiltrate the very interesting lives of the two sisters and he finds himself intrigued by both of them. He becomes very close to them, spending a lot of time with them at their beautiful home - Monk House - and escorting them around town. The author portrays the two sisters so well that it is easy to see how Gabriel becomes so intrigued by these extraordinary women who live their lives with such gusto.

There is a breathlessness about Season that is reflected in the way the story unfolds. You know you are rushing towards this tremendous climax and you are helpless in the grip of the novel, simly knowing something momentous is going to happen.
I was not at all disappointed by the ending of the story and derived a sense of “job well done” satisfaction from it and really wished Gabriel the best at the end.

There is a lot of information to sift through in the novel but it doesn’t make for clunky reading. The author has a deft easy touch with her descriptions and I found myself doing research on the side into the various subjects the sisters are so keen on. A lot of this is discussed on Natasha’s site, so do feel free to visit them here.

I have got a very interesting blog to follow on from the review by Natasha and a mini competition for a copy of the paperback of Season of the Witch.
Who wrote this? Liz at 6:00 pm

This sounds like a great book - quite an orginal twist on things... Nice job on the review. :)

Thank you for the great review! It makes me want to read the book even more!